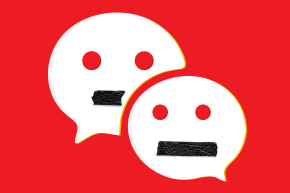 China’s overwhelming ability to hide internet content, the largest such government censorship engine in the world, even affects its citizens as they travel abroad, according to a new study.

That’s if they use the country’s most popular mobile program, WeChat, a do-everything app that provides a more overarching experience than anything in the U.S. WeChat’s more than 800 million customers use it to chat, text, send video, but it also functions as a payment app like Apple Pay, hails cars like Lyft, plays games, and lets users interact with media, like a given television show playing in its vicinity.

China’s Great Firewall, a massive, multi-pronged government apparatus to censor words, images, and ideas from the general populace, has been in effect for decades. But it secretly applies to WeChat, as well, researchers at the University of Toronto’s Citizen Lab, a project devoted to technology and human rights, found.

Though the vast majority of WeChat users are based in China, those who download the app and register it with a non-Chinese phone number wouldn’t notice overt censorship. For users who registered with a phone anywhere else, someone who wanted to talk about “Hong Kong booksellers” — a likely reference to Lam Wing-kee, a Hong Kong bookstore owner who was arrested in 2015 for allegedly selling books that gossiped about China’s leaders — would have no problem.

For users who registered with a Chinese number, however, the message would be sent to WeChat’s servers in China and stay there. Such restrictions also apply to WeChat chat rooms.

Similarly, CitizenLab found, WeChat’s built-in web browser censors content if registered with a Chinese phone number. At least 41 different websites are blocked for such users, it found, while there was no noticeable censorship for other users.

That a China-based app would be so amenable to censorship should come as no surprise; Chinese law demands all companies operating in the country be responsible for the content on their apps and websites, and even provides a list of banned topics.

Vocativ attempted to reach WeChat for comment, but emails to its official press email address bounced back. Its acceptable use policy does say, however, that “there may be technological measures in WeChat Software that are designed to prevent unlicensed or unauthorised use of WeChat Software,” without clarifying what such unauthorized use means.