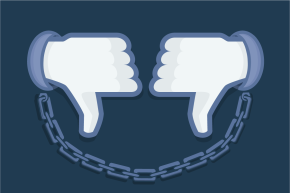 A Las Vegas woman was sentenced to a year in jail on Wednesday after her campaign to frame her ex-boyfriend using a fake social media profile was discovered. Unfortunately, it was discovered after the man had been arrested several times for crimes he did not commit.

Stephani Lawson, 25, pleaded guilty to one count of false imprisonment and one count of perjury. She was arrested last September, about a year after her ex-boyfriend, who the Orange County, California, District Attorney’s office is calling “John Doe,” was first arrested for threatening her through messages sent from a Facebook account she claimed was his. Doe was arrested four times between September and December 2015 based on Lawson’s claims and documentation of the threats she said he sent her.

By the end of 2015, Doe’s bail was $200,000, and his grandparents, who he lived with, had to put their house up as collateral to pay it, according to the Orange County Register.

In May 2016, Lawson claimed that in the days before she was set to testify against Doe in a preliminary hearing, he threatened her again through the Facebook account. Something about the screenshots of the messages she showed to prosecutors didn’t look right, and one of them decided to look into it. Facebook and T-Mobile, Lawson’s mobile provider, were asked for records so investigators could determine if Lawson’s account was being used to send the threats from what she claimed was Doe’s account.

It took the entire summer, the OC Register reported, for the service providers to reluctantly cough up the documents that would clear Doe. They showed that the threats sent from Doe’s account indeed came from Lawson’s own phone and IP address.

“We had to go around and around with them all summer until we got the documents we needed,” Deputy District Attorney Mark Geller said.

The charges against Doe were finally dismissed last October, about a week after Lawson was arrested and more than year after Doe’s first arrest. T-Mobile and Facebook did not respond to request for comment as to what caused the delays. Doe’s grandmother died before she could see her grandson cleared of all charges.