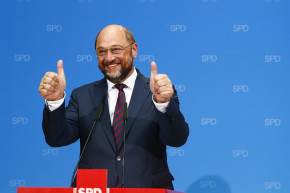 Fans of the European Parliament’s president and German chancellor candidate Martin Schulz are tapping into the high energy that helped propel Donald Trump to the White House with their own version of r/The_Donald.

The subreddit, called r/The_Schulz, has been around for one week, and already gained over 3,000 subscribers with its “semi-serious satire” of r/The_Donald’s style, language, memes, and more. In an explanatory post published on Monday, one community member described the subreddit’s rationale: “This is mainly about satirizing Drumpftown. One vehicle to do so is ‘translating’ their slogans to German, often deliberately obfuscating them, referencing a rather old style of German humor, whereby ‘hack’ translations from English to German are made.”

Much like their counterparts on r/The_Donald, Schulz fans call each other genossen (navigators), call on one another to brücke bauen (build the bridge), and congratulate each other for hohe energie (high energy) posts. They refer to their candidate in some posts as Papa, and der absolute mettmann, a play on “the absolute madman” using the German word mett, uncooked minced pork spread on bread.

One of r/The_Donald’s most irritating features, bots that reply certain key phrases or words, is also copied on r/The_Schulz — DerSchultzBot replies to posts with DIESER ZUG KENNT KEINE BREMSEN!! (this train has no brakes!!), and BRÜCKEN STATT MAUERN! (bridges, not walls!).

Martin Schulz announced on Thursday that he would resign as European Parliament president on Thursday, with the intention of running in next year’s election in Germany. Schulz is likely to run on the Social Democratic Party’s ticket, a center-left party aiming to unseat Angela Merkel. While his fans imitate Trump supporters’ style, Schulz himself couldn’t be more different that the Donald —he’s a staunch supporter of the EU and of free movement across EU state borders.