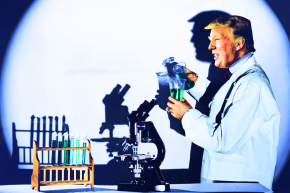 Scientists Plead For Integrity Under Trump
By Allee Manning

Scientists Plead For Integrity Under Trump

An open letter signed by over 2,300 scientists begs President elect Donald Trump to do something that probably isn’t going to happen: adhere to their principles of scientific integrity.

According to Buzzfeed News, 22 Nobel winners are among those who have signed the letter, which was published by the Union of Concerned Scientists on Wednesday.

The group’s requests for Trump and the 115th Congress sticks to the basics, like adhering “high standards of scientific integrity and independence in responding to current and emerging public health and environmental factors” and ensuring federal agencies are led by officials who have shown a respect for science and who use it as the basis in decision-making.

Sounds obvious, sure, but this is a letter addressed to a man who once said that climate change is a “hoax” created by and for the Chinese and promised to dismantle the Environmental Protection Agency “in almost every form.” In another example, Trump’s meeting with a prominent anti-vaccine activist has emboldened the scientifically-dubious movement.

His cabinet picks have already raised red flags when it comes to putting scientific fact over personal feelies. Rep. Tom Price, who will serve as the secretary of Health and Human Services, was recently called out by Physicians for Reproductive Health for his “disregard [for] the strong medical evidence that access to safe and legal abortion and contraception protects not just a woman’s health, but that of her family and community.”

The scientists also ask that they be allowed to continue their work without fear or reprisal or retaliation through political or private-sector interference. In addition to their requests of Trump, the signatories promise to “constructively engage with and closely monitor the actions of the Trump administration,” adding that they “stand ready to hold accountable any who might seek to undermine it.” Subtext: watch your back.