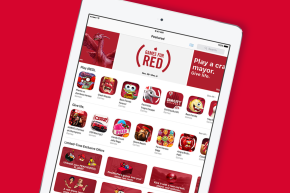 This year is their biggest initiative yet in support of (RED), an organization fighting AIDS

Twenty different games on Apple’s App Store are turning red in an effort to raise awareness on World AIDS Day.

For the past 10 years, Apple has partnered with (RED), an organization founded in 2006 by U2 singer Bono and philanthropist Bobby Shriver, with a mission of fighting HIV/AIDS by preventing HIV transmission from mother to unborn child.

There are currently 37 million people living with AIDS, and the disease killed more than a million people in 2015 alone. It’s the primary cause of death for reproductive aged women worldwide. According to (RED), the group has raised 365 million dollars which they have used for grants and anti-retroviral treatment for HIV, which costs 30 cents a day, in Ghana, Kenya, Lesotho, Rwanda, South Africa, Swaziland, Tanzania, and Zambia.

For the next week, Apple’s App Store will feature Games for (Red) with participating games including Candy Crush Jelly Saga, FarmVille: Tropic Escape, and FIFA Mobile.

Apple’s first (RED) initiative dates back to 2006 with a widely popular red iPod nano. This year they’re adding four products to their year round (RED) products line including an iPhone 7 case, and Beats Headphones.

Four hundred stores internationally will feature red logos or red-themed window displays, making this Apple’s biggest initiative in support of (RED) to date. They will also feature The Killers’ new album, and all proceeds from their eleventh single “I’ll be Home for Christmas” will be donated to (RED). Bank of America has also partnered with Apple to donate $1 for every Apple Pay transaction to (RED) until December 7, with a limit of one million dollars. A documentary about the organization called “The Lazarus Effect” will also be free on the Apple store.