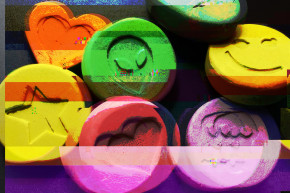 Ecstasy Could Soon Be A Legit Drug For Treating PTSD

The notorious party drug MDMA — the pure unadulterated form of Ecstasy —is one step closer to being redeemed as a legitimate and effective treatment for people living with post-traumatic stress disorder (PTSD).

On Tuesday, The New York Times reported that the Food and Drug Administration has given its blessing to scientists to test out MDMA in Phase 3 clinical trials, thanks to earlier promising results. These large, randomized, and controlled studies in human patients are the final hurdle every drug needs to pass through before they can receive FDA approval. The trials, as with all the recent MDMA research conducted so far, will be funded by the nonprofit Multidisciplinary Association for Psychedelic Studies (MAPS).

MAPS has been trying to get MDMA and other stigmatized illegal drugs like marijuana and LSD back on the medical map since its inception in 1986. While MDMA was first used with the express purpose of helping smooth out psychotherapy sessions upon its creation by chemist Alexander Shulgin in the 1970s, it quickly developed a reputation as a recreational drug meant solely to give its users an euphoric high. Patient advocates and researchers have since faced an uphill climb trying to use MDMA to help suffering patients.

In the case of PTSD, it’s been shown that the drug can ease patients into lowering their guard while being treated with conventional methods, such as exposure therapy. The MAPS approach used in the earlier Phase 2 trials, which the organization offers training in, involves dosing patients for three 8-hour sessions out of a total 12-week period of psychotherapy.

The studies so far, conducted in the U.S., Canada, and even Israel, have recruited treatment-resistant patients, which account for 30 to 50 percent of PTSD sufferers. And results have been extremely encouraging, with some trials having remission rates upwards of 80 percent. Patients have also had their improvements largely hold up a year later.

If there’s anything that might get in the way of MDMA’s rise to respectability, it’s the high sticker price of clinical drug research. Pharmaceutical companies have unsurprisingly been unwilling to pay for studies of a drug that has long since lost its ability to make much of a profit. Various parts of the Phase 2 trials have individually cost anywhere from $200,000 to $1.5 million and above, and their funding efforts haven’t successfully covered their bills entirely as of yet. Ultimately, they estimate that it will take around $22 million to shepherd MDMA through FDA approval by 2021.

But interest in MAPS’ overall mission does seem to be picking up: Earlier this August, the organization announced having been awarded a $2 million grant from the Colorado Department of Public Health and Environment to conduct a pilot study using smoked medical pot to help treat PSTD. That trial will involve testing four different potencies on a group of 76 treatment-resistant veterans.