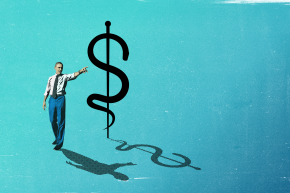 Paying Our Medical Bills Has Gotten Easier In The Obama Era

But what will happen when Trump takes office?

With a Trump presidency on the horizon, it’s the perfect time to evaluate how the country’s health care situation has shifted through the Obama years. Perhaps the most straightforward way is to simply look at how many of us can afford our health care expenses when they come up. Luckily, the CDC and other federal health agencies have just released their latest report on that — and the verdict is largely good: The last five years has marked a steady decline in the number of people who struggle to pay their medical bills.

With the help of data from the National Health Interview Survey, a regularly scheduled poll of Americans’ health habits and behaviors, the authors found that, in 2011, 21.3% of Americans under the age of 65 reported living in a family that had problems paying their bills. By the first six months of 2016, that figure had dropped to 16.2%. This drop held across all racial, gender, and socioeconomic groups, but some of the largest gains, percentage-wise, were among the poor and lower income, those uninsured or with public health insurance (i.e. Medicaid), and Hispanics.

The passing of the Affordable Care Act in 2010 is likely one of the largest single factors explaining this trend. For instance, the largest year-to-year drops were seen between 2013 to 2015, coinciding with the start of the ACA’s major reforms, such as the end of discrimination based on pre-existing health conditions, the expansion of Medicaid, the creation of tax credits that subsidized insurance costs for some, and the rollout of the online healthcare marketplace. Moreover, research from the Kaiser Foundation has shown that nearly 13 million non-elderly previously uninsured adults have obtained a health insurance plan as of the end of 2015, a sharp drop down from the 41 million uninsured in 2013. And the current uninsured rate, 10.5% of non-elderly Americans, is a historic low. There’s also evidence that the ACA has acted as an economic stimulus while lowering general health care spending.

There are likely other factors at work, of course, such as a continued job recovery, which means that more people can afford to pay their bills regardless of the ACA. What’s more, there are some trends that push in the opposite direction, increasing medical costs, such as a rise in health insurance deductibles. And not everyone has seen affordability improve recently: From 2015 to 2016, African Americans actually had a slight uptick in their inability to pay medical bills.

But Lynn Quincy, director of the Healthcare Value Hub at the Consumers Union, tells NPR that Obamacare was likely the major overall factor in making medical bills more affordable in recent years. “The fact that this report shows it’s getting easier, it seems like we should lay a good part of this at the door of the ACA,” she said.

In light of Trump’s ascension, it’s worth asking whether these gains will continue or slowly slip away. His rhetoric on health care has been characteristically bombastic but vague. During the campaign though, he did release a bare bones 7-point health care plan that advocated a complete repeal of the ACA and other changes.  A study of this plan by the nonpartisan Center for Health and Economy in July found that it might reduce the privately-insured individual premiums by 20%, but at the cost of leaving 18 million people uninsured, mostly from losing Medicaid eligibility and removing the ACA’s consumer protection reforms.

Since the election, however, Trump’s stance has shifted around. No less than a week after his victory, he offhandedly announced that he’d be fine with keeping the most popular aspects of the ACA, the requirement that insurers cover preexisting conditions and letting young adults stay on their parents’ insurance plans for longer. But on Tuesday, he declared former orthopedic surgeon, ardent Obamacare critic, and current House Representative Tom Price (R-GA) his pick for secretary of the Department of Health and Human Services. Unlike many of his counterparts, Price has actually offered his own legislative proposals on how he’d replace the ACA with other reforms.

As The New Republic’s Sarah Jones noted Tuesday, Price’s Empowering Patient First Act would likely leave many vulnerable people in the dust. Imperfect as the ACA is, it’s difficult to imagine that many Americans’ will see further improvements in their ability to afford health care if it is repealed.