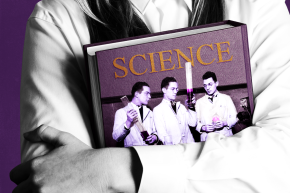 Kids Learn That Scientists Are Men Early
By Allee Manning

Gender stereotypes about careers are pervasive and often learned by children at a young age. Ask a child to draw a scientist, and the result will probably look more like Back To The Future’s Doc Brown than The X-Files’ Dana Scully.

A new study shows one factor that contributes to kids’ early ideas that men are supposed to be scientists and women are not: The educational materials they use at school.

The study, published in PLOS One this month, shows this gender stereotyping in action through images of children and adults featured in online learning resources. The UK-based authors looked at over 327 images from Scientix and OERcommons, two major resources for European primary school students.

They found that, in these materials, scientists were overwhelmingly depicted as being male, while teachers were typically stereotyped as women. While it’s true that, today, more men really do work in science and engineering fields than women, the researchers’ visual analysis showed that male scientists were still overrepresented after accounting for that factor.

The unequal prevalence of male and female scientists might reflect reality more closely than a 50-50 split, but the researchers maintain that a “more balanced view” should be adopted in these kinds of materials. The very lack of representation and role models, they said, could be a factor in why fewer girls pursue STEM careers, creating a self-fulfilling cycle.

“This stereotyping may cause a low interest in girls for science and may cause them to view science as something more for boys,” they wrote.

Of course, research has shown that there are plenty of discouraging reasons women are leave the STEM pipeline throughout the entirety of their educational and professional careers, and gender parity within the field is some ways off. But maybe the very small step of showing more female stock models in lab coats could be a good place to start?