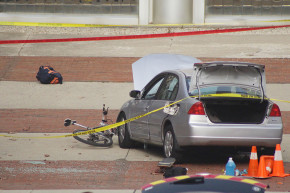 ISIS: Ohio State Attacker Was ‘Soldier Of The Islamic State’
By Gilad Shiloach

ISIS: Ohio State Attacker Was ‘Soldier Of The Islamic State’

The ISIS-linked Amaq News Agency has claimed responsibility for the car and knife at Ohio State University that injured 11 people on Monday. The agency says that the attack suspect, who has been identified as Abdul Razak Ali Artan, an 18-year-old Somali refugee, is “a soldier of the Islamic State” and carried out the attack in response to calls by the terror group to attack countries that take part in the coalition against ISIS.

Ali Artan allegedly drove his car into a crowd of people and then continued the attack with a butcher knife, before he was killed by authorities. According to NBC News, the suspect wrote on what appears to be his Facebook page that he had reached a “boiling point,” and made a reference to “lone wolf attacks.” The page also reportedly cited Anwar al-Awlaki, a radical American cleric from San Diego who has inspired Jihadists in America.

Ali Artan left Somalia with his family in 2007, according to reports, and lived in Pakistan, before coming to the US in 2014. He completed a degree at an Ohio community college, before enrolling at Ohio State.

The terror group’s supporters took to social media and online forums late on Monday to celebrate the attack in Ohio. “May God accept him in heaven,” one user wrote of the attacker on the al-Minbar forum, frequented by ISIS supporters.

Claims like this are common by the terror group after acts of violence in Western countries. It does not indicate that the group had any direct role in planning the act, nor that the suspect was instructed to act. The Pulse nightclub shooter, Omar Mateen, was similarly dubbed ‘a soldier’ by the Islamic State. Authorities are still investigating the Ohio suspect and his motivations.

On Saturday, official ISIS media released a video encouraging would-be lone wolves on how to carry out terror attacks in the United States and Europe. “There is no need to use firearms, like a rifle or a pistol,” said an ISIS member who appeared in the video. He offered advice on what type of knives to use and instructed viewers on how to stab victims efficiently.