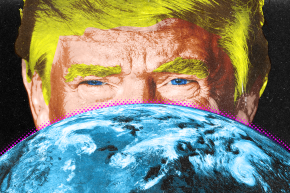 Climate change is only a part of NASA's planet-level work, but it's inseparable from everything else

Last week, Donald Trump’s space policy adviser revealed the incoming administration’s plans to end all of NASA’s climate research and, in the process, gut the agency’s earth science division. Let’s consider the crucial science that could be lost if the Trump administration follows through on the most extreme end of this promise.

The $5 billion NASA spends on science research accounts for about a third of its overall annual budget. While the $2 billion the earth science division receives makes it the best-funded climate change research program on the planet, that’s only part of the agency’s exploration of our planet. NASA’s earth science missions also study daily weather patterns, map land and ocean surfaces, monitor natural disasters, and build a clearer picture of how countless geological and atmospheric processes fit together as one interconnected global system.

As that suggests, it’s not necessarily possible to separate the division’s climate research from the other work it does. For instance, NASA scientist Steve Running pointed out to PBS that “climate is really just the day-to-day accumulation of weather,” so any move against climate would hamper longer-range weather forecasting technology in general.

But Trump adviser Robert Walker, a former congressional ally of Newt Gingrich and longtime advocate of space exploration, told the Guardian that the President-Elect intends to shift NASA’s focus away from the Earth and solely onto space. The plan would be to end NASA’s climate research — which Walker claimed was “politicized,” in direct contradiction of the overwhelming scientific and international consensus on the issue— and transfer the remaining aspects of NASA’s earth science to other government agencies. Walker isn’t an official member of the transition team, so guessing how much his statements might actually predict what’s going to happen in the next four years is speculation piled atop speculation.

What is known, however, is that NASA’s earth science division has built a decades-long legacy of vital research, and the agency’s network of Earth-observing satellites represent one of the most tangible parts of that work. NASA’s signature earth science accomplishment is probably its research into the ozone layer, which led to an international agreement in 1989 to limit the production of the chemicals behind the ozone hole. Follow-up work on the ozone layer in recent decades has looked at how it connects to the wider atmosphere and its role in climate change.

The GRACE satellite provides the world with a monthly map of the planet’s gravity anomalies, which allow us to know the subtle ways the Earth’s mass shifts over time. That fine-grained knowledge makes it possible for geologists, oceanographers, and other researchers to be orders of magnitude more accurate in their observations than they otherwise would be. Landsat 7 and 8 work to continuously map how the planet’s surface changes, giving invaluable data for natural disaster responses and humanitarian efforts.

Other NASA satellites provide planetary-scale look at parameters like rainfall, soil moisture, air quality, ocean salinity, wind speed and cloud cover, among many others. All those more specific areas of study lead back to the division’s overall effort to understand the planet’s energy balance — which, yes, does include examining the carbon dioxide content of the atmosphere — and how the processes that shape Earth’s land, oceans, and atmosphere all fit together. They allow us to see the spread of pollution in close to real-time, to chart how polar ice sheets change over time, and to see how disasters like hurricanes impact communities and environments alike.

The earth science division originally had the more romantic name Mission to Planet Earth, which is a good reminder of a basic reality: As fascinating and important as other planets are, no world offers more complex and more pressing mysteries to solve than the one we live on right now, and no other world more desperately needs scientific exploration. And it’s not as though earth science is somehow separable from the Trump team’s stated goal of deep space exploration: What we learn about our planet helps guide NASA’s research into our solar system neighbors and into exoplanets orbiting distant stars. The earth science division — both its climate and non-climate research, as though there’s any true difference — is at the foundation of not just NASA or American scientific research, but that of the entire world. The Trump administration removes that brick at the world’s peril.