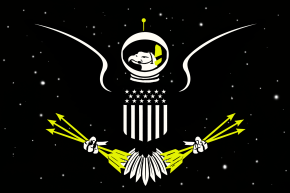 DARPA wants to build a "completely new architecture for space."

The next frontier for the military is in space. Last week, the U.S. Department of Defense made it very clear it plans on establishing a stronger presence beyond Earth, with plans to build a military space plane that could be used for war and space robots that can repair satellites.

When DARPA Director Arati Prabhakar spoke last week at the Defense One Summit she said the agency is placing “big bets” on developing technology that will allow it to build a “completely new architecture for space.” The goal is for the Department of Defense to have more control beyond Earth’s atmosphere for both defense and data collection.

The director clarified that “real-time operational” means being able to launch a craft into space at a day’s notice during a war. “Think about how that would completely change the calculus for an adversary that’s thinking about [using an anti-satellite] weapon to take out one of our satellites,” she said.

Currently, rocket launches are often planned years ahead, which Prabhakar said is an “unacceptably long” timeframe.

DARPA expects to speed up that launch time with the creation of the Experimental Spaceplane XS-1. In 2014, the agency announced its plans to create the XS-1, a reusable craft that can fly to the atmosphere ten times in ten days for only $5 million per flight. Now, according to Prabhakar, they are entering the second phase of the initiative, during which engineers will design and develop the craft.

The other space-focused objective Prabhakar said DARPA is especially committed to is the Phoenix program, focused on prolonging the life of crafts in space. The agency plans on building robots that can inspect and make repairs in the geosynchronous Earth orbit (GEO) zone in which satellites orbit Earth. Machines can exist in GEO but humans can’t survive the radiation.

The program also includes the development of satlets — small modules that could connect and create a full satellite. Each satlet would serve a different function, like supplying power, controlling movement, and collecting data, making the job of a robot technician much easier.