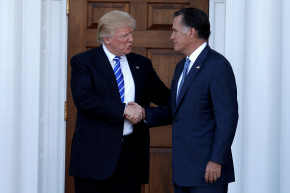 Across Twitter and online, supporters of Donald Trump are trying to influence his Cabinet choices

Just as in the presidential campaign, Twitter continues to dominate Donald Trump’s decisions over who will populate his new administration in January. Online, supporters are rushing to try to influence his choices, split most recently, over who the president-elect should appoint as the next Secretary of State. Some of the names in the mix include former New York City Mayor Rudy Giuliani, former Governor of Massachusetts Mitt Romney, General David Petraeus, and even Tulsi Gabbard, the former vice chair of the Democratic National Committee.

That Trump has raised Romney as a possibility, even after he called Trump a “phony, a fraud,” has sparked considerable backlash among Trump’s supporters. Vocativ found the hashtag #NeverRomney has been posted more than 297,000 times in the past week. Many of Trump’s most outspoken supporters have used the hashtag to express their distaste for the former governor and presidential candidate.

If you are #NeverRomney say it loud, say it proud. But don't doubt Trump's judgment. This is nothing compared to hard choices he'll make.

Support for Giuliani remains strong among the pro-Trump camp, despite reports of foreign business ties that could create numerous conflicts of interest should he be appointed. Breitbart, the far-right news website run by Trump Chief Strategist Steve Bannon, published a poll it took of its own readers, showing that out of 100,000 responders, Giuliani was the preferred choice.

One of the most unexpected candidates for the job is Gabbard, the Democratic member of the House of Representatives from Hawaii’s 2nd district. Gabbard was a strong backer of Bernie Sanders during the Democratic primaries, leading her to resign her position as DNC Vice Chair. Gabbard was reported to have met with Trump in New York last week, leading to endorsements from, among others, former Ku Klux Klan leader David Duke. He issued an endorsement of Gabbard on his personal website, praising her as a “strong and principled opponent of any intervention in Syria.”