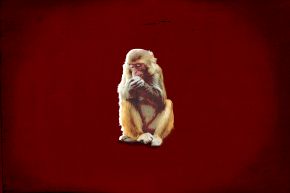 Low Social Status Hurts Your Immunity, Even If You’re A Monkey
By Alasdair Wilkins

Low Social Status Hurts Your Immunity, Even If You’re A Monkey

It’s no great surprise that a person’s social status can have a profound effect on their health. The daily realities of living in poverty can leave people more vulnerable to disease and stress, with far fewer resources available to them to deal with these struggles. But a new study on rhesus macaques suggests it’s more than that: Low social status might be harmful to health on a biological — or even a genetic — level.

In a 2008 report, the World Health Organization argued that the health disparities between rich and poor come from a toxic combination of bad policies, bad economics, and bad politics. And while all those factors certainly matter for humans, they can’t explain why social status also affected how rhesus monkeys dealt with diseases.

As they detail in the most recent issue of Science, Duke University researchers had multiple sets of female rhesus monkeys spend a year together. These monkeys quickly develop natural hierarchies, with more dominant monkeys intimidating and demanding grooming from those below them. They then rearranged the monkeys so that five of the most dominant ones were together, then five of the second most dominant ones, and so on. New orders emerged, meaning social status was no longer something reflective of each monkey’s personality, but rather determined by shifting context.

Looking at the monkeys’ immune systems before and after these changes in status, the researchers found that those at the top of the social pecking order had far higher levels of immune cells, meaning they were in much better shape to handle diseases. Thousands of genes governing the immune system behaved differently depending on where a monkey ranked, with recognizable effects on the monkeys’ behavior.

More Here’s How Feeling Lonely Can Make You Sick

“In some ways, some socially subordinate monkeys resemble humans with anxiety disorders, displaying hypervigilance and constantly scanning the environment for threats,” Stanford biologist Robert Sapolsky writes in a commentary on the research. “For example, if you have a desirable food, eating is repeatedly disrupted as you look to see who may be coming to appropriate it from you. Other subordinate animals more closely resemble humans with major depression, displaying the learned helplessness of not even bothering to eat, because you expect that losing your food is inevitable.”

The speed with which these changes happened from one phase of the experiment to the next is worth noting. That suggests social status can have powerful effects on health, but the damage may not be permanent. Then again, most people can’t expect to have scientists randomly reassign their socioeconomic status after a year, and Sapolsky also notes there are long-term problems that come with chronic immune conditions like inflammation, which include premature aging and death and pregnant mothers passing on those health risks to their offspring. In those cases, low social status could have a powerfully compounding impact on health.

Ethical and logistical issues mean we likely can’t attempt to replicate these results in humans, but this study suggests the World Health Organization wasn’t entirely correct. Social status might well shape our health on a levels far deeper than we imagined, and in ways that simple policies, like increasing access to hospitals and education, can’t solve alone.