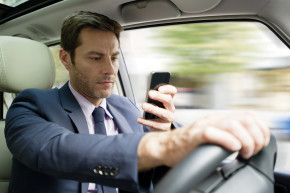 How Smartphone Makers Could Save Lives On Thanksgiving Weekend

To cut down on crashes, the federal government calls for a "driving mode" on phones

By the end of the Thanksgiving weekend, more than 43 million Americans will have traveled 50 miles or more via car, AAA estimates. Unsurprisingly, it’s also one of the most deadly times of the year for car crashes.

On Wednesday, the National Highway Traffic Safety Administration pushed for a relatively simple technological stopgap that could help— car-proofing our smartphones and mobile devices to reduce the temptation of distracted driving.

Distracted driving caused upwards of 3,000 deaths in 2013, according to the CDC, and played a role in 18 percent of crashes that caused injury that year. While we’re less certain about texting’s specific role in causing accidents, at least 385 fatal car crashes and 404 deaths were tied to it in 2014, according to data cited by NHSTA. And there’s reason to believe that these figures have only been on the rise thanks to the boom in smartphone and tablet popularity coupled with a resurgence in time spent behind the wheel.

The agency, unveiling its second set of recommendations to combat distracted driving, called for electronic device manufacturers to develop a “driving mode” for devices, similar to the airplane mode that people activate while flying. This would ideally make many tempting functions, like web browsing, texting, and watching the world’s cutest baby pugs on YouTube, impossible to do while driving. An earlier set of guidelines had pushed for similar restrictions on electronic devices and systems that are built into the car already.

“NHTSA has long encouraged drivers to put down their phones and other devices, and just drive,” said NHTSA Administrator Dr. Mark Rosekind in a statement. “With driver distraction one of the factors behind the rise of traffic fatalities, we are committed to working with the industry to ensure that mobile devices are designed to keep drivers’ eyes where they belong — on the road.”

The reports contains two suggestions: One is a paired mode for devices that allow it to automatically sync up with the car entertainment or navigation systems when a person enters the vehicle, and another is a driver mode for individual devices whose drivers can’t or are unwilling to connect to their car.

How these functions would work in practice is still a bit shaky. For instance, the technology would have to automatically disable a device when it’s being used by a driver but not a passenger. That ability does theoretically exist, according to the NHTSA, but needs refinement. In light of that, the agency is pushing for a driver mode that’s manually activated, at least for now.

And since the guidelines are strictly voluntary and non-enforceable, it remains to be seen whether manufacturers will actually heed the NHSTA’s advice, though there’s certainly a PR incentive to do so. Earlier this summer, Niantic felt compelled to install roadblocks into its blazingly popular Pokémon Go mobile game, following a rash of anecdotal accounts of people crashing their cars while playing. The safeguard now prevents the game from playing if users are moving at more than 10 miles per hour.

In any case, it seems likely that any dent in device-induced car accidents would help make a dent in traffic fatality rates. So if you’re behind the wheel this Thanksgiving, do us all a favor and save the Angry Birds until after you’re nestled inside, ready to slice the bird.