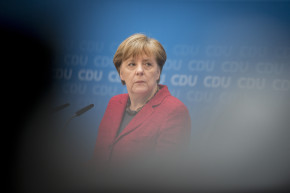 The chancellor warned that the internet was "manipulating" public opinion, a sentiment echoed by President Obama last week

German Chancellor Angela Merkel placed fake news firmly in her crosshairs on Wednesday, claiming that the proliferation of false reports across social media had fueled the rise of populist movements and political extremism in the West and hinted that Germany’s government could take steps to censor it.

In her first address to parliament since announcing she would seek re-election next year, Merkel warned that the internet was “manipulating” public opinion, a sentiment echoed by President Obama last week when he spoke alongside the German chancellor in Berlin.

“Something has changed — as globalization has marched on, [political] debate is taking place in a completely new media environment,” Merkel said on Wednesday, according to a report by Agence France-Presse. “Opinions aren’t formed the way they were 25 years ago.”

Declaring “fake sites,” “bots,” “trolls,” and “algorithms,” as causes for the spread of bogus news and misinformation online, she added: “We must confront this phenomenon and if necessary, regulate it.”

Merkel’s stark assessment comes as Obama continues to raise his own concerns about the influence that fake news may have on individuals. “In an age where there’s so much active misinformation and it’s packaged very well and it looks the same when you see it on a Facebook page or you turn on your television,” he said in Berlin last week. “If everything seems to be the same and no distinctions are made, then we won’t know what to protect.”

In an interview with the New Yorker’s David Remnick, the U.S. president elaborated on his views. “The capacity to disseminate misinformation, wild conspiracy theories, to paint the opposition in wildly negative light without any rebuttal — that has accelerated in ways that much more sharply polarize the electorate and make it very difficult to have a common conversation,” Obama said.

Concerns over a budding cottage industry of fake news and misinformation peddlers have surged following the surprise election of Donald Trump this month. An analysis of Facebook activity by BuzzFeed News found that news stories on social media appeared to have had more reach and influence in the final months of the campaign than articles by mainstream news outlets —and they tended to overwhelmingly favor the Republican nominee.