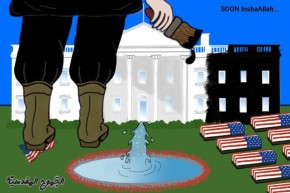 ISIS Fans Are Raving About A Female Cartoonist
By Gilad Shiloach

ISIS Fans Are Raving About A Female Cartoonist

She's said to be an avid ISIS supporter, and her cartoons are spreading across social media among other followers

Political cartoons are very popular across Middle Eastern countries, published in newspapers and used in online campaigns, whether by Syrians, Kurds, Palestinians or to express sentiments on the historic election victory Donald Trump.

ISIS, is among those, and its fans are surprisingly touting a female cartoonist for her creations online. The terror group’s al-Minbar forum is promoting cartoons drawn by al-Jamooh al-Maqdisiya, said to be a new female member to the forum and a supporter of the Islamic State. At least 30 of her cartoons are being shared widely online, all of them promote ISIS, to threaten America, Turkey, Saudi Arabia and other nations considered threats to ISIS’ survival. Her identity could not be independently verified.

Excited by her images, forum members are calling on each other to spread them across other social media platforms. That she is female is only energizing them. “You are an example of the answer to the enemies of the Islamic State,” raved one. Another excused her gender by saying that “the supporters of our state are the very image of a Muslim, whether man or woman.” They ‘blessed’ her and said “your participation here will add new color and a creative beauty to our forum.”

In her replies on the same thread, she asked the members to “spread the cartoons among Muslims,” hoping “they will affect some of them.” She says she decided to spread ISIS message with cartoons as “many people don’t tend to read” and want to “access information quickly and concisely.” She claims to use a software named sketchbook to draw the cartoons.

Out of more than 100 posts about these cartoons in the thread, only one user wondered if the art of drawing cartoons isn’t violating Sharia law, as Islam prohibits drawing or sculpting animates being that Allah has created. But others responded with a YouTube video showing a Fatwa, or decree, that permits drawing. She herself also spoke up, saying she’d conducted research and found that it was justified to use cartoons that “confront the Western media.”

The coalition “dog” being kicked out of Mosul

The world being led like lambs to the slaughter in Mosul

Trump is the American president