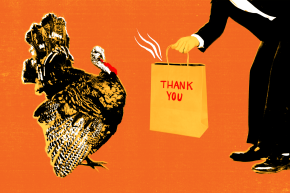 The Takeout We Order On Thanksgiving
By Allee Manning

The Takeout We Order On Thanksgiving

On Grubhub, Indian food is a favorite among holiday-holdouts

Not all Americans enjoy your boring old turkey and mashed potatoes on Thanksgiving, and plenty don’t even bother with the holiday. Data from Grubhub, provided to Vocativ, gives a glimpse at how everyone else prefers to chow down.

It turns out that Thanksgiving-resisters are flocking to Indian food.

At last year‘s Thanksgiving, chicken samosa was ordered 449 percent more than on any other fall Thursday night, making it the most anomalous choice. Out of the 20 most atypically popular foods ordered on Grubhub/Seamless that day, Indian dishes accounted for 15 of them. They included gulab jamun (a spongy Indian dessert), chicken pakora, keema naan (bread stuffed with meat), and paneer pakora (fried cheese).

Though there’s clearly a trend at work, it’s hard to say what’s behind it. Obviously, restaurant closures can limit options. Since Thanksgiving is an American holiday, restaurants owned by non-celebrating immigrants and second-generation Americans serving the cuisines of their culture are thus more likely to stay open.

More Strategy: Where To Eat Your Jewish Christmas Dinner In NYC

But why Indian? According to the Migration Policy Institute, Indian immigrants represent a large segment of the foreign-born American population, second only to Mexican immigrants. So, sure, any given Indian restaurant is probably more likely to be open. But Indian restaurants are actually pretty unpopular, by and large — while there are roughly 20 times as many Indians as Thais in New York City, according to the Washington Post, there are about the same number of restaurants specializing in both of these cuisines. So the question remains: what makes Indian food such a popular Thanksgiving takeout choice?

Krishnendu Ray, a professor of food studies at New York University, says it’s hard to say for sure, but he has some speculations gleaned from years studying the cuisine.

It’s important, he says, to keep in mind who is ordering from Grubhub. According to a press representative, the main demographic is urban-dwelling millennials.

“Chinese takeout feels very outdated, whereas Indian appears to be the familiar exotic,” Ray said. He noted that Indian culture on the whole is especially embraced by “white young professionals” — think yoga, spiritualism, the culturally-appropriated bindi — and this trend could be an extension of that.

He added that Indian cuisine’s vegetable-forward approach is probably playing into its appeal as well. It’s a good pick for vegans and vegetarians, but also those just looking to denounce the kind of eating that Thanksgiving represents. After all, what could be more anti-establishment than rejecting the traditional giant bird feast and eating a healthy vegetable-centric meal instead?

I'm fine with being a vegetarian during Thanksgiving, just means more indian food for me

Perhaps the trend is also spurred by the fact that Indian food is anecdotally known to be filling, and those who don’t celebrate the holiday are still looking to share in that way-too-full feeling many Americans experience that day.

While there’s no real way to know why Indian food appears to be an up-and-coming Thanksgiving fave, it’s interesting to think that some segments of the population will likely be seeing butter chicken in place of turkey or chutney instead of cranberry sauce on their tables this year.