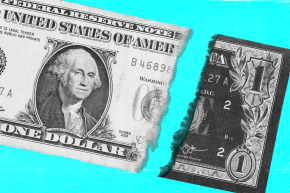 The gap in earnings between black and white people in the United States has always been a disgrace, with black men today earning only about 66 percent as much as white men. But even that figure hides a larger divide, because it only considers those who are currently working. Figure in the percentage of black men who can’t find a job — many, because they are incarcerated — and the wage gap is as bad as it’s been since 1950.

Since the Civil Rights era in the 1960s and 1970s, around when the earnings gap somewhat decreased, it has ceased to improve, according to a new working paper published at the National Bureau of Economic Research. But when those who aren’t earning any money at all, because they can’t find or don’t have a job, it grows to pre-Civil Rights levels. The percentage of black men not working is now double that of white men. (The authors just looked at data for men, to eliminate the additional confusing factor of a gender wage gap.)

According to the authors of the paper, the gap appears to have remained steady because gains in some areas have been offset by worsening problems elsewhere. For instance, whereas black men in 1950 had only 5.6 years of education compared with 9.1 for whites, black men today have 12.5 years compared with 13.5 for white men. The closing of the education gap has allowed for the gap between top-earning black and white men to decrease, but it also means that those shut out of those benefits are in even worse shape. That’s especially true because now so many jobs require at least a high school degree, so those who don’t have one could find themselves completely shut out of the job market.

While the unemployment rates for white and black men aren’t hugely different, far more black men are out of the labor force entirely, meaning they have given up even looking for work. Many are shut out of the job market because they are behind bars. Mass incarceration has left eight percent of working-age black men in prison, compared with just 1.5 percent of white men. That alone can’t account for the 35 percent of black men in 2014 who were out of the labor force, although the eight percent in prison doesn’t account for all the men who struggle or fail to get a job after being released.

The authors argue that economic growth that benefits top earners and those with access to higher education will disproportionately harm black men — and perhaps black women and minorities in general, though we can’t necessarily assume that from just this data — because they are more likely to be shut out of those parts of the economy in the first place. Instead, economic growth that focuses on improving things for lower and middle income earners will also have the crucial benefit of closing the racial divide.