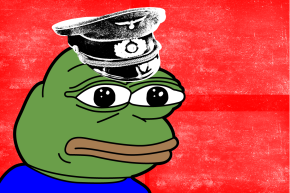 A Politico editor who appears to have posted the home addresses of alt-right leader Richard Spencer and then advocated going to his house with a baseball bat reportedly has resigned. Now, he’s the target of Spencer’s army of alt-right trolls.

Michael Hirsh, the national editor at Politico Magazine, posted what appear to be Spencer’s home addresses on Facebook on Tuesday with the instructions to “Stop whining about Richard B. Spencer, Nazi, and exercise your rights as decent Americans. Here are his two addresses.” He then gave two addresses in Virginia and Montana.

One of Hirsh’s Facebook friends then asked in the comment section of his initial post, “what does knowing his home addresses do? Send a letter? Confront him in person? Seems like counter-speech is the main thing we can do. You can call it ‘whining’ but I’m not sure that’s fair or constructive.”

Hirsh responded: “I wasn’t thinking of a fucking letter, Doug. He lives part of the time next door to me in Arlington. Our grandfathers brought baseball bats to Bund meetings. Want to join me?”

According to the Daily Caller, a conservative website, Hirsh then resigned.

“These posts were clearly outside the bounds of acceptable discourse, and Politico editors regard them as a serious lapse of newsroom standards,” Politico Editor-In-Chief John Harris and Editor Carrie Budoff Brown told the publication. “They crossed a line in ways that the publication will not defend, and editors are taking steps to ensure that such a lapse does not occur again.”

Vocativ could not independently confirm that Hirsh resigned — neither Hirsh nor Harris responded to Vocativ’s request for comment.

After Hirsh’s post was made public, a Twitter user who uses the handle “American Aristocracy” posted an address that he claimed to belong to Hirsh and wrote “Attack!” at the end of his post. “American Aristocracy” also has a collection of posts mentioning Nazism and themes popular amongst the alt-right. Since his post, several others have re-posted his address. Another user tweeted at Politico, saying “Your author is inciting violence against others. Fire him, or things will get much worse for you.”

@politico Your author is inciting violence against others. Fire him, or things will get much worse for you.#lawsuit pic.twitter.com/BEf96hNBul

@michaelphirsh Should Watch His Back. If I Were Him I Would Fear Someone Attacking Me With A Baseball Bat. @politico

Spencer made waves when he led a group of about 200 members of his now infamous alt-right movement in a Nazi salute and Third Reich-themed battle cry of “Hail Trump, hail our people, hail victory!” at a conference he sponsored over the weekend in Washington D.C. Spencer is in the process of trying to win over the younger, more extreme members of the alt-right who have primarily existed online and have gone to great lengths to threaten and intimidate journalists — including this reporter — who don’t align with their racist world view.

As Vocativ reported in June, this type of online harassment reached a fever-pitch after two well-known bigots, and unapologetic supporters of Donald Trump —Andrew Anglin and Andrew Auern­heimer — targeted journalists like Julia Ioffe, who wrote a profile of Melania Trump, Donald Trump’s wife, for GQ magazine. In a post on his Daily Stormer blog, Anglin — under the headline “Empress Melania Attacked by Filthy Russian Kike Julia Ioffe in GQ” — encouraged his supporters to go after Ioffe.

The Anti-Defamation League, a civil rights advocacy group, said that he essentially declared “war” on Jewish journalists. “You’ve all pro­voked us. You’ve been doing it for decades — and cen­turies even — and we’ve finally had enough. Chal­lenge has been accepted,” Anglin wrote.