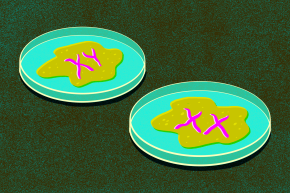 In so many ways, it’s a good thing to treat women the same as men — this practice could help eliminate the gender pay gap in the workplace, say. But when it comes to medical and public health research, that isn’t always the case. A new paper, published in the Journal of the American Medical Association, argues that researchers tend to ignore sex and gender differences and even focus solely on men —often to the detriment of women, according to the authors.

“Until recently, most human health research has favored men, despite the fact that women comprise half the population,” said co-author Cara Tannenbaum of the University of Montreal in a press release. “It’s time to hold scientists accountable.”

The paper argues that researchers have “an ethical and scientific imperative” to address how sex and gender factor into their findings. (And they make a note of the importance of distinguishing between sex, which relates to biology, and gender, which is more complicated.) All too often, the authors say, researchers lump men and women, males and females, together, without accounting for any potential sex or gender differences in the results. Instead, they should report these data separately, they argue.

“Too often, sex- and gender-specific results are missing from publications on medical research, particularly those evaluating therapies,” said Tannenbaum.

This combining of results can be dangerous, especially when it comes to clinical trials. “When results for male and female participants are combined, the average of aggregated male and female participants’ results may mask differences between them,” they write. When it comes to something like the toxicity of a particular drug, for example, this is critical — what might seem fine in the aggregate could actually be dangerous for one sex or the other.

Often, studies entirely omit women and focus just on male subjects, who have traditionally been overrepresented in clinical research — but the results are nonetheless generalized to women. That’s even true in the case of research on female-specific drugs like Addyi, the so-called “pink Viagra.” To evaluate how this female desire drug interacted with alcohol, researchers tested it on 23 men and just two women. Never mind women’s greater sensitivity to alcohol.

More Female Physicians In The U.S. Are Paid Less Than Male Docs

“We now know that women metabolize certain drugs differently than men do,” she said, noting that the Food and Drug Administration now advises women to take half the previously recommended dose of the sedative zolpidem. “By not studying women or by reporting only combined results, we could be missing information critical for women’s health.”

There is some evidence of progress on this front. Earlier this year, a panel of experts published a set of guidelines for researchers and journal editors when to comes to the importance of reporting on sex and gender. And several journals are now requiring transparency around sex- and gender-related results — for example, the Journal of the American Medical Association, which published this paper, requires authors to report on the sex breakdown of participants or to at least explain why only one sex was included in the study.

But there is still a long way to go toward equity in scientific research. As Tannenbaum puts it, “It is both good science and the right thing to do.”