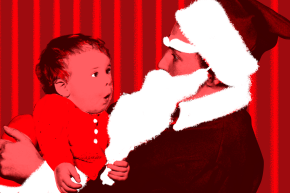 Lying To Kids About Santa Is A Big Mistake, Psychologists Say
By Alexandra Ossola

Lying To Kids About Santa Is A Big Mistake, Psychologists Say

The dark side of white Christmas lies

Most kids who were raised thinking Santa was real remember when they discovered the lie. Often, they hear it from other kids, though sometimes it’s from vindictive siblings or parents who have tired of the ruse. It can be a traumatic moment. For some, it’s the beginning of the end of their innocence — the first time they know for certain that parents have fabricated aspects of the world to them.

A new essay penned by mental health researchers illustrates just how damaging the Santa lie can be. And the reasons parents do it are often more for themselves than for their children.

There are, of course, white lies we tell children that are less damaging, the study authors, writing the Lancet Psychiatry, note. Talking about the death of a pet or a loved one, for example, might need some softening or spin.

To adults, Santa Claus can seem to be one of these innocent fibs. But kids may disagree. Maybe it’s the extremes to which adults go to encourage the fantasy — impersonating him, participating in semi-religious rituals like putting out cookies, and even celebrating Saint Nicholas at church. It can seem like a lightly-veiled way to keep kids in line, complete with benevolent surveillance and “elf on the shelf” conspirators, as they start to get whacked out on candy canes and presents. But it’s a lie perpetuated on a massive scale, a global conspiracy that encompasses everyone from preschool teachers to shopping mall supervisors.

Given all that, when the truth is revealed, it can feel like a far greater deception than a simple white lie. “If adults have been lying about Santa, even though it has usually been well intentioned, what else is a lie? If Santa isn’t real, are fairies real? Is magic? Is God?” the authors ask.

The debate surrounding the Santa Claus ruse has been raging for years. Some proponents, such as well-known skeptic Richard Dawkins, have said that myths help children become more imaginative and ultimately determine what is real and what is not. Critics say that it opens up children to derision from their more street-savvy peers, that it makes the world seem less magical as it is on its own, and that the whole delusion has become so overblown that obfuscates the more meaningful parts of Christmas.

“It’s a lie, it degrades your parental trustworthiness, it encourages credulity, it does not encourage imagination, and it’s equivalent to bribing your kids for good behavior,” writes David Kyle Johnson, a philosophy professor at King’s College in Psychology Today.

So why do parents do it? The authors of the current study say it’s mostly about the parents wanting to themselves return to the days of optimism, when they believed that the world was magical. It also leaves room for them to engage in their own versions of make-believe, something encouraged by communities around Harry Potter and Star Wars but rarely socially acceptable on such a large scale.

Ultimately, each family makes its own decision based on its own ethics. As Christmas time closes in on us again, parents of young kids will have to decide if this is the year to burst the bubble. If you decide to do it, try to break the news with care and preserve as much of that trust as possible between adults and kids.