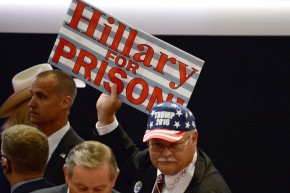 Trump Diehards Furious After He Drops Threats To Prosecute Clinton

The supporters who chanted "Lock her up!" at Trump rallies are feeling a little let down

Stunned Donald Trump supporters are feeling betrayed after one of the president-elect’s top aides suggested that Trump will no longer pursue a criminal investigation against Hillary Clinton, undercutting one of his regular — and farfetched — campaign promises.

Though dubious from the outset, few words electrified Trump’s diehard fans as much as his repeated vow to sic a special prosecutor on his Democratic rival during the final days of the race. The blustery refrain prompted wild chants of “Lock her up” at rallies and events that flashed on countless television and computer screens, fueled a fledgling Hillary for Prison campaign into a movement with more than a million supporters, and metastasized on social media.

But the fever dream of seeing Clinton in an orange-tinged prison pantsuit evaporated on Tuesday when Trump campaign manager Kellyanne Conway paid a visit on MSNBC’s “Morning Joe.”

“I think when the president-elect, who’s also the head of your party now … tells you before he’s even inaugurated he doesn’t wish to pursue these charges, it sends a very strong message, tone and content, to the members,” Conway said. “And I think Hillary Clinton still has to face the fact that a majority of Americans don’t find her to be honest or trustworthy, but if Donald Trump can help her heal, then perhaps that’s a good thing.”

If there was any remaining hope for the promised prosecution, Trump put an end to it during an on-the-record interview with reporters and editors from the New York Times later that afternoon. “It’s just not something that I feel very strongly about,” the president-elect said about a Clinton investigation, people at the meeting reported. “I don’t want to hurt the Clintons, I really don’t. She went through a lot and suffered greatly in many different ways.”

The words sent a jolt through Trump’s sprawling network of supporters, with many furious over the apparent flip-flop.  “You were elected to #lockherup NO ELITE PRIVELIDGE [sic]!” fumed a Twitter user with the name victorious deplorabl. “Do not break your promises! No double standard!”

Others lashed out at the tell-it-like-it-is president-elect, lambasting him as a phony,  pleaded with him to reverse course, and promising to protest if he doesn’t.

Trump won't pursue charges against Clinton @realDonaldTrump Is A #LIAR And A #Phony #LockHerUp https://t.co/csZRMhV01F

@realDonaldTrump #LockHerUp #CrookedHillary Do not let it go.....They are #NOT good people.

As the outrage rippled through the Trump-infused corners Reddit, Facebook, and Twitter, some of his most influential supporters online worked to tamp down the disappointment. Bill Mitchell, a political talk show host and Trump stalwart, floated the theory that the president-elect merely wanted to avoid giving President Obama the opportunity to pardon Clinton before he left office in January.

“If Trump says, ‘We have no plans to prosecute Hillary,’ they preclude an Obama pardon. Then if FBI recommends prosecution, they have her,” Mitchell tweeted to his 156,000 followers. “For those who don’t understand, a [President of the United States] can pardon someone after the crime. Indictment or conviction NOT required.”

Trump’s apparent decision to end speculation of a Clinton investigation marks just the latest effort by the president-elect and his team to walk back some of his signature campaign promises made before his stunning victory two weeks ago. Since then, he has also reversed course on his pledge to end Obamacare, and wavered on whether his administration will attempt to build a wall along the Mexican border or ban Muslims from entering the United States.

These political maneuvers have not gone unnoticed among some who voted Trump into office.

“I hope this is all BS but if not we need to hold Trump accountable,” wrote Mike Englewood on the pro-Trump Facebook group “The Deplorables,” which has more than 500,000 members. “Next thing you know he won’t built [sic] [a] wall or make a BS fence.”

Englewood continued: “I hope people grow a spine and stand for what they believe. We made a choice and if he doesn’t deliver we find someone else.”