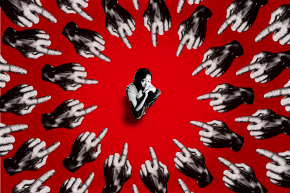 Members of minority groups have an increased likelihood of being harassed

Given the ever-increasing problem of online harassment, it’s hard to imagine how the majority of a group of internet users could believe that people are mostly kind online, as a new study from the Center for Innovative Public Health Research suggests. The researchers surveyed over 3,000 Americans over the age of 14, and found that 62 percent of the respondents felt this way, but with one notable distinction: black and lesbian, gay, or bisexual respondents were less likely to think so, something that reflects their own experiences.

The study, called “Online Harassment, Digital Abuse, And Cyberstalking in America” shows that internet harassment is pretty common: 47 percent of Americans have experienced it personally, and 72 percent said they had witnessed it.

The researchers define harassment in three major categories: direct harassment, like being stalked, threatened, or called offensive names; invasion of privacy, for example, being hacked, having personal information or images exposed without permission, being impersonated, or being tracked online; and denial of access, which occurs when people are spammed, reported for illegitimate reasons so as be blocked from a platform, or otherwise attacked using technology in order to be prevented access. The responses revealed that different communities experience online life quite differently, with people of color, younger internet users, and sexual minorities facing harassment at higher rates, something anecdotal evidence seems to support.

Recently, particularly cruel online harassment campaigns, against both public and non-public people, have received media coverage. When “Ghostbusters” actress Leslie Jones was brutally attacked online this past summer, internet trolls were following the same tactics used in the past to threaten video game critic Anita Sarkesian and to harass Fox News anchor Megyn Kelly. In 2012, Rutgers student Tyler Clementi hanged himself after his roommate surreptitiously livestreamed him having sex with another man. These now well-known examples reveal the way women, black internet users, and members of the LGBTQ community can face more extreme harassment than other groups, as can be seen in the study’s data.

More How Your Race Determines What’s On Your Twitter Feed

Black internet users surveyed were more likely to have both witnessed and experienced online harassment. It’s a problem that appeared to increase as members of the alt-right and other white nationalists become increasingly comfortable spewing their racist messages online. Though Twitter has taken recent steps to rid the platform of these users, internet trolls can find creative ways to circumvent these supposed safeguards. News of a large alt-right website’s upcoming “fake black person” harassment campaign — which encourages white nationalists to impersonate black Twitter users in order to infiltrate black Twitter communities for still-unknown reasons — demonstrates just how complex finding a solution to the problem is.

The study also found that lesbian, gay, and bisexual internet users face and observe harassment more often than their heterosexual peers. As a group, members of this community are far more likely to be called offensive names, experience sexual harassment, and receive physical threats. There was no harassment experience measured by the survey that LGB individuals were less likely to experience than heterosexual individuals.

These internet users were also five times as likely to report detrimental exposure of sensitive personal information. While the report didn’t detail exactly what kind of personal information tended to be at the heart of such harassment, it’s easy to see how damaging “gayshaming” or public outing could be, putting members of this community at a heightened risk.

While men and women reported having faced online harassment at similar rates overall, women experienced it in different ways. Men were actually more likely to be “called offensive names” or have someone try to embarrass them online than women were. And women experience sexual harassment and long-term harassment at higher rates than men.

According to the report, women were more likely to feel anger, worry, or fear following online abuse than men, who (on the whole) took it less seriously. Of women and men that experienced the same kind of harassing behaviors, 53 percent of women considered it “online harassment or abuse” compared to just 40 percent of men.