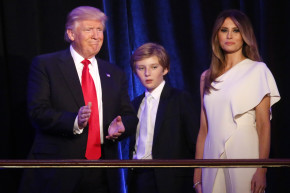 On Sunday, President-Elect Trump confirmed that his wife Melania will not be moving to the White House and instead will stay in New York with their 10-year-old-son, Barron, at least until he finishes the school year.

The decision will necessitate increased security around Trump Tower in midtown Manhattan, on a central thoroughfare that was already blocked off for portions of the election — and the Trumps continued presence in the building has fueled fears of endless gridlock. “That building is going to become the White House of New York,” president of the global security company TigerSwan, Jim Reese, told the New York Post of the Trump Tower in New York where the family currently lives.

But beyond the traffic, many are expressing anger at the symbolic snubbing. One Facebook commenter wrote, “what an outrageous idea — how ungracious, uncouth, uncivilized and just unbelievable. What – the White House isn’t good enough for the Trumps? Wow.” Another commenter wrote, “This is going to be a nightmare. There are PLENTY of amazing private schools to send him to in DC.”

A Trump transition spokesman told the Washington Post there’s “obviously a sensitivity to pulling out a 10-year-old in the middle of the school year.” Barron, who attends a private school on the Upper West Side, will need to travel with a security team to and from school.

This decision is nearly unprecedented. There have only been two other incidences where the first lady did not move into the White House: Martha Washington who didn’t move in because the White House hadn’t been built yet, and the wife of William Henry Harrison, the ninth US president, who died one month after taking office.

But not everyone is furious. Others defended it as a an act of good parenting.

“What Mr. Trump said was that they would be waiting until after the school year is over,” said Dominic Trombino, a Chicagoan, in an email. “People are getting angry over the easy, bite-sized portion and failing to look at all the facts. It’s frustrating to see, because there are actually things to get angry about with the coming Trump presidency, but a mother and father deciding to keep their 10-year-old son in his current school for the rest of the school year is hardly one of them.”

Trump has not said if his family will move to the White House after the school year ends, or if they’ll stay in New York throughout his term.

Others had their own theories about why Melania could be holding off moving into the White House:

Melania Trump had ZERO interest in being the actual First Lady. She's lazy and entitled.

OMG this entire presidential campaign was Melania's ploy not to have to live with Donald Trump. I get it now. https://t.co/IjsHB6Rb1j

So the White House is not good enough for Melania