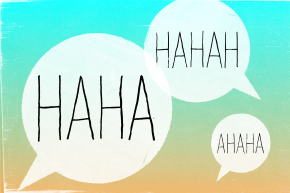 “Haha” Is Officially Out, And “Hahah” Is In
By Allee Manning

This Grocery Drives Itself To Your Door
By Ruby Nitzberg
Stats

“Haha” Is Officially Out, And “Hahah” Is In

Just like in real life, small differences in the way we laugh online can convey totally different meanings. When typing online messages it can be hard to know exactly how many “ha’s” are appropriate. Is “haha” too curt, akin to telling your coworker that their joke isn’t actually funny? Or, conversely, is “hahaha” overkill, something that is better reserved for flirting on Tinder rather than a work-related email? Even more confusing, when is better to start with an “a” rather than an “h,” a la “ahaha”? Linguistics can be a minefield, and the internet seems to only exacerbate the confusion.

While the best way to laugh online will forever remain up for debate, the online proofreading tool Grammarly recently released data that helps clear things up a little bit.

Grammarly’s software checks for both spelling and grammar inaccuracies and is commonly used as a Chrome extension. In acting as a traditional “spellcheck,” the tool also allows users to add unconventional but oft-used words to their personal dictionaries, so that they can be typed without resulting in the little red underline. In an analysis of how Grammarly users added words to their personal online dictionaries, the company has been able to gain some insight into the way we collectively prefer to express e-laughter.

“Haha” is already in Grammarly’s dictionary, but many people are going out of their way to add spellings with additional “h’s” and “a’s” to their dictionary. In fact, typing “hahah” warrants an auto-correction to “haha,” prompting over 220 people to save “hahah” or “ahaha” to their online dictionaries.

“People aren’t adding it because they just assume there’s no standard way to spell it — they’re seeing a correction and deliberately adding a different variant that they prefer for some reason,” Karen Hertzberg, a media relations employee at Grammarly explained.

Grammarly also found that while usage of “lol” has remained consistent, an uptrend could be seen in how often people added the acronym “lmao” to their personal dictionaries.

“If it’s really true that ‘lmao’ is becoming more frequent, that could be because… ‘lol,’ for many people, doesn’t even mean laughter anymore. It just means, ‘I acknowledge what you said,” Sali Tagliamonte, a professor of linguistics at the University of Toronto, told Vocativ.

There’s no real internet dictionary yet, but the internet experts seem to be in agreement that “hahaha” denotes a more genuine response to humor than the simple “haha.” (Interestingly, the latter remains the most common way of laughing on Reddit.)

Similar to “lol” it seems that using “haha” to imply actual laughter has become kind of passé.

“‘Ha ha’ is pretty old. It’s been in the language. You can look in the Oxford English dictionary and find it,” Tagliamonte said. “The minute something becomes overused it doesn’t have the same impact anymore, which is probably why you’re getting all these variations.”

According to its website, Grammarly is licensed by more than 600 leading universities and corporations, used by professionals to get “in a variety of fields, such as law, healthcare, academia, marketing, engineering, and journalism.” So it’s possible that the additional “ha” people are using has made its way into professional communication. Perhaps it’s something we can attribute to millennials’ takeover of the workforce.

“I would suggest that what’s going on [online] is the same thing we find is going on in language in general: young people are pushing language change forward,” Tagliamonte said.