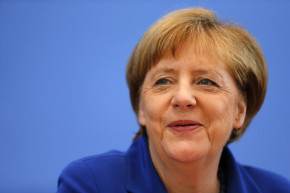 German Leader Has One Big Group Of Supporters: Refugees
By Shane Dixon Kavanaugh

German Leader Has One Big Group Of Supporters: Refugees

Asylum seekers and refugees in Europe are ecstatic over the decision by Angela Merkel to seek a fourth term as German chancellor.

Members of “The Syrian Home In Germany,” one of the largest migrant communities online, greeted the news of Merkel’s re-election bid with an outpouring of emotion and well wishes. The head of the country’s Christian Democratic Union party, Merkel welcomed more than a million refugees and migrants into Germany during the height of the migrant crisis last year, a move condemned by her political opponents — and even some allies. However, the chancellor continued to defend the policy vigorously.

“From the bottom of our hearts we are hoping that she will win,” a user named Yamoon, originally from the Syrian capital of Damascus, posted to the Facebook group, which now has more than 165,000 members, most of them from the war-ravaged Middle East. Dozens of other members added their support.

Translation: “I wish she will get elected with all my heart because she is very humanitarian – great humanitarian. I wish women would rule the world – it will stop the wars.”

Translation: “God, I wish we could help her get elected, but we don’t have the right to vote.”

Already chancellor for 11 years, Merkel will now likely face the same populist and nationalist pressures that helped fuel Donald Trump’s political rise in the United States, galvanize British voters to break away from the European Union, and are now giving a boost to far-right leader Marine Le Pen in France. Earlier this year, the Alternative for Germany, a far-right, anti-immigrant party made large gains in parliament by running against  Merkel’s immigration stance.