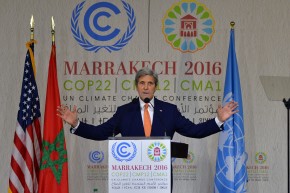 When representatives from almost 200 nations came to Morocco two weeks ago for their annual international climate change negotiations, the goal was to build on last year’s landmark Paris Agreement to reduce carbon emissions and avert a building global crisis. By the time the conference concluded on Friday, after Donald Trump’s surprise election victory, the goal was very different, especially for the Obama administration: to not blow-up the progress already made.

Big and bold proclamations were few and far between at the meeting, held in Marrakech, though 47 of the world’s poorest countries did step forward with moral leadership, committing to switch to nothing but renewable energy sources by between 2030 and 2050. At least most countries were genuinely intent on nailing down the specific policies needed to make the agreement work and keep global temperature increases to within 2 degrees Celsius, with 1.5 degrees the preferred goal.

But President-Elect Donald Trump was the elephant in the room, putting the conference in a strange place, with U.S. officials simultaneously praising the potential of the agreement and scrambling to ensure it survives. Trump has stated he will “cancel” the Paris agreement within his first 100 days and recommit the United States to coal and oil production. Faced with that future while still diplomatically bound to comment just on the current administration’s plans, American diplomats remained publicly upbeat at the conference even while reportedly working behind the scenes to guard against the incoming administration from reversing their climate policies. In his press briefing, the U.S. State Department’s special envoy for climate couldn’t help but convey the bizarre dichotomy between America’s climate present and likely climate future.

It won’t really become clear until after January 20 what the Trump administration will mean for the Paris agreement or climate change generally, though the President-Elect’s current policy positions would make him literally the only world leader on the planet who denies the existence of climate change. Former French president Nicolas Sarkozy, who is running for his old position in France’s upcoming election, has already floated the extreme possibility of imposing a carbon tax on the U.S. if it exits the Paris agreement. Whatever happens next, the U.S.–the world’s second largest CO2 emitter–reversing course on climate change could well make the past two weeks at Marrakech little more than an exercise in wishful thinking.

“If the U.S. drops out, as the second biggest contributor of CO2, then this might greatly weaken the global leadership for this process and may doom the world to undertaking a serious effort to retain something close to our current global climate,” University of Washington climate scientist Dennis Hartmann told Vocativ in an email.  He did, however, leave a sliver of room for optimism. “Perhaps other nations can successfully continue to lead global efforts to reduce greenhouse gas emissions, even if the U.S. administration tries to lead us backward to a fossil fuel economy.” For example, China, the world’s largest emitter, has re-affirmed its climate commitments.

What is clear is that if countries fail to act, disaster looms. Just this past week saw another round of climate research showing a globally devastating increase of five degrees Celsius between now and 2100 is still possible given current emissions trends. Even in a world where Hillary Clinton won the election on November 8 and the presidency remained unquestionably committed to improving the world’s climate situation, the Paris agreement would almost certainly be insufficient to the task by itself.

Hartmann underscores this importance: “Current scientific understanding indicates that Paris is a good start, but larger commitments to greenhouse gas reductions will need to be made to avert 2˚C human-induced global warming, which would have very significant global effects.”