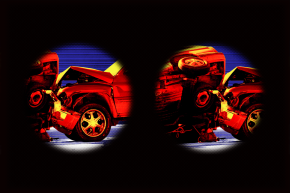 Can a simulated collision get people to drive safely over the holidays?

Drunk driving PSAs just got a whole lot scarier. You won’t see the crash on a screen–you’ll experience it yourself in 3D.

In an effort to present the don’t-drink-and-drive message in a new, hyper-realistic way, Smirnoff and Johnnie Walker manufacturer Diageo turned to virtual reality.

The project, produced by VaynerMedia, is called “Decisions.” The four-minute video shown through a VR headset is enhanced through a vibrating chair that’s synched up with the video, which results in an experience one tester called “all-too-real.” Four vehicles are involved in the virtual “crash,” and there’s a horrific storyline baked in:

“In one vehicle, three carefree friends are heading to a party; in another, a woman is celebrating a breakthrough in her career; and in a third, a married couple are having their first date night since the birth of their new baby,” Edward C. Baig  writes for USA Today. While Baig doesn’t give insight into the exact outcome, we can imagine it’s pretty harrowing.

The campaign, which can be viewed through Facebook 360, YouTube 360, and NYT VR (sans vibrating chair), is intended to provide a reminder of drunk driving’s dangers during the holiday season, when the majority of deaths from it occur.

“With VR technology on the rise both in consumer interest and utilization, we believe this is the ideal method to directly and emotionally impact consumers,” James Thompson, chief marketing and innovation officer at Diageo North America said in a statement, adding that he hopes the experience will be jarring. “It’s easy for us to be desensitized to certain issues unless we live them out firsthand.”

While the campaign may sound a little gimmicky, it’s far from the first time that VR has been used in effort to build empathy and increase awareness. It’s actually become quite a fad. For example, the United Nations has used VR to bring the plight of one Syrian refugee and one Ebola doctor in Liberia to life, and the University of Southern California recently turned to VR to simulate the effects of climate change in Santa Monica. While it’s not clear whether or not projects like these are truly changing hearts and minds, the possibility seems promising. One study, for example, published earlier this year found that VR environments that simulate interaction with nature helped users feel more connected with the environment.