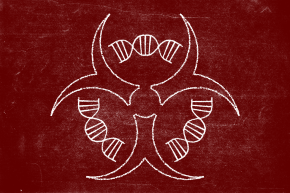 America Is Unprepared For The Bioterror Threat Of Gene Editing

Advances in CRISPR have outpaced our ability to contain them, a White House advisory group warns

For all its national security focus on terrorism, America is deeply unprepared for future terror threats that could come from emerging biotechnologies, says an Obama administration advisory committee.

The President’s Council of Advisors on Science and Technology (PCAST) recently issued a public letter to the administration, calling for a renewed and expansive biodefense strategy. While noting that the world has had to contend with plenty of natural microbial threats, such as the Zika virus, the letter highlights the dangers in new, “exponential” advances in bioengineering if maliciously or improperly used. These involve everything from relatively cheap, speedy gene-editing methods like CRISPR to techniques that now allow scientists to create synthetic DNA from scratch.

“Relatively straightforward examples of misuse would include the modification of pathogens to overcome existing immunity or to be resistant to available drugs,” the council offered as a possibility in their letter. For example, CRIPSR technology, which allows scientists to selectively and precisely edit DNA in living cells, could theoretically allow terrorists to craft viruses that damage, repress, or modify important human cell genes with sleek precision, while microchips could carry the portable DNA blueprints of a synthesized living or viral bioweapon.

Although the 19-member group was quick to note that even creating a “truly novel and effective” supergerm would be hard and likely impossible for any non-state sponsored terrorist group to do right now, they’re hardly the first to sound an alarm over the potential threat of these much-heralded technologies.

This September, the Pentagon’s Defense Advanced Research Projects Agency (DARPA) announced their Safe Genes program, a research initiative aimed at developing ways to contain accidents created by “gene drive” technology. Gene drives could allow scientists to quickly propagate a new genetic trait through a population by eliminating the randomness of gene inheritance. One of its major applications, for instance, would allow a gene that prevents mosquitos from carrying malaria to be passed down between generations 100 percent of the time, rather than the normal 50-50 shot. This could help quickly end the threat of malaria around the world, but the chances of some scary mutation in the modified genes aren’t nil–and there would be no way to control it after it’s released.

And in May, National Intelligence Director James Clapper and his office named gene-editing technology a “major threat to the security of the United States, its deployed troops, and allies,” in their latest Worldwide Threat Assessment of the U.S. Intelligence Community.

The scientific community, for its part, has largely preached restraint with CRISPR technology and its ilk. Many scientists have called for a uniform ban on the practice of using CRISPR to edit human sperm or egg cells. Gene edits in these cells would allow the creation of so-called designer babies who could pass their changes down to the next generation, a process we might have little control over.

The major theme underlying these warnings is that our capacity for bioengineering has outpaced our ability to prepare for the many things that could go wrong. And on top of these new concerns is the underlying reality that we’re not even that great at currently containing emerging natural diseases, such as the Zika or Ebola viruses.

PCAST has recommended several short- and long-term actions to better prepare for natural and man-made germ threats. These include creating a new federal position to coordinate a collaborative national biodefense strategy, the implementation of a $2 billion “rainy day fund” for public health emergencies, and a yearly $250 million investment  in “medical countermeasures,” with a long-term decade-long goal of being able to design, manufacture, and deploy vaccines within 6 months’ time. Echoing their earlier 2014 report on antibiotic resistance, they’ve also called for strengthening disease surveillance efforts and streamlining the development of new antibiotics.

President-Elect Donald Trump, in case you’re wondering, hasn’t spoken much about bioterrorism. During the GOP debate in September 2015, though, he took a moment to say vaccines were causing an “autism epidemic,” a debunked claim he’s repeatedly supported over the years. During the lead-up to his first presidential run under the Reform Party way back in 1999, he did outline how he would fight germ warfare if elected, in his companion book, “The America We Deserve.” According to excerpts detailed by the Independent, Trump called for the stockpiling of antibiotics in major cities, sensors to detect biological devices, and poaching Russian scientists away from foreign terrorist groups.

As for how he planned to fund these and other counterterrorism measures?

“Imagine this for a second: The (Trump) National Security Lottery would sell tickets just like in a Powerball Lottery, but dedicate every cent to funding an anti-terrorism campaign,” he wrote. “Talk about a good reason to buy a lottery ticket.”