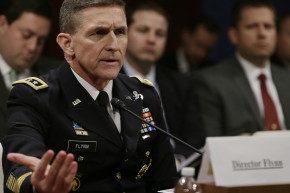 Donald Trump’s pick for national security adviser, a role that will be central in shaping the president-elect’s military and foreign policy, is a pervasive peddler of fake news.

Lieutenant General Michael T. Flynn, who served as a top adviser to the Republican reality television star throughout his campaign, repeatedly shared bogus stories, conspiracy theories, and unsubstantiated rumors with his tens of thousands of followers on social media, a Vocativ analysis found.

The 57-year-old retired intelligence officer posted incorrect news stories that said Hillary Clinton supported building a wall along the border in Mexico, claimed that President Obama had refused to deport illegal immigrants so they could vote in the election, and others based on a number of allegations that are flagrantly false or intentionally misleading.

“When is media going 2 talk about #NeverHillary Executed Scientist May Be Just One Hillary Victim,” Flynn tweeted on August 9, linking to a story from the website lifezette.com that claimed the former Secretary of State had a role in the death of an Iranian scientist.

In a post on November 2, less than a week before election day, he promoted a fake news story to his more than 70,000 followers by the website True Pundit that alleged Clinton had ties to money laundering and child sex trafficking. That post received almost 7,000 retweets.

Here are other instances:

On Friday, CNN reported that Flynn’s son, Michael G. Flynn, who serves as his father’s chief of staff and top aide, also has a long history of sharing conspiracy theories on Twitter and Facebook. Among them were allegations Clinton aide Huma Abedin had connections to the Muslim Brotherhood and that Republican Florida Senator Marco Rubio was a closeted homosexual who abused cocaine, according to the report.

Brash and unapologetically provocative, the elder Flynn might best be known for his repeated claims that Islam poses an existential threat to the United States. He falsely claimed that Shariah law is taking root in the U.S., described Islam is a “malignant cancer,” and said that fearing Muslims is “rational.”

Flynn served for two years as director of the Defense Intelligence Agency under President Obama, but was eventually fired in 2014. He claimed he was forced out because of unwavering focus on Islamic terrorism. CNN has reported that he was dismissed because of his combative management style.