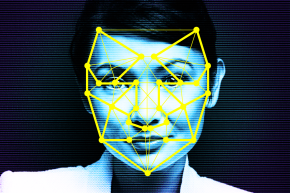 Facebook Wants To Read Your Facial Expressions
By Allee Manning

One day, Facebook may be able to tell whether you’re smiling or grimacing at your distant cousin’s political rant.

This week, the company acquired an facial recognition analysis startup called FacioMetrics, which is known for its augmented reality capabilities and for making an app that recognized seven different emotions on people’s faces.

The startup, which announced the acquisition on its website, came out of Carnegie Mellon University’s Human Sensing Laboratory. FacioMetrics first garnered attention for its facial feature image analysis app, Intraface, last year. Intraface’s technology enabled real-time face tracking, pose and gaze estimation, and expression analysis, but it has now been removed from app stores. Its original branding was as a research tool that could help detect autism, measure audience engagement in public speaking scenarios, and help end distracted driving.

According to TechCrunch, Facebook has alluded to an interest in incorporating artificial intelligence functions into its software through technology similar to the kind FacioMetrics offers. Among the future applications mentioned in a press briefing were “gesture-based controls, [and the ability to] recognize facial expressions and perform related actions.” You may be able to one day be able to virtually “react” to a Facebook friend’s post with, say, a real-life “haha,” “wow,” sad, or angry face.

Of course, this is more of a long-term plan. For now, Facebook tells TechCrunch it will be using FacioMetrics technology to improve on its augmented reality mask features and “bring more fun effects to photos and videos.” On Halloween, the social media platform debuted limited edition masks that functioned much like Snapchat filters for use on Facebook Live.

The move is hardly surprising on Facebook’s part considering how the social media site has a documented habit of copying other social media sites — especially Snapchat. But if privacy experts were worried when Facebook adopted facial recognition to suggest photo tags in 2014, they may soon have much more to think about.