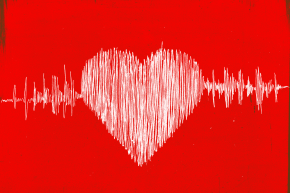 Doctors Test Diagnosing Heart Disease By The Sound Of Your Voice

Heart and other chronic diseases could cause hidden vocal tweaks

It’s a common enough belief that our voices can easily give away whether we’re lying or feeling guilty about something. And although that’s more myth than reality, a growing number of biotech companies and scientists do think we could use our voices for something possibly even more helpful — diagnosing disease.

Earlier this week at the annual American Heart Association Scientific Sessions held in New Orleans, Louisiana, doctors from the Mayo Clinic in Minnesota presented their results on a nifty, if preliminary, double-blind study of patients who visited the clinic. They asked 120 patients scheduled to undergo a coronary angiography, a common X-ray exam that detects clogged or blocked arteries, to first record their voices in three different ways via an app they downloaded on their phones. In 30-second intervals, they first recorded themselves reading a bland piece of text, then describing a positive experience of theirs, then lastly a negative one. For control’s sake, they asked the same of 25 patients who were either healthy volunteers or getting non-heart related tests.

The doctors found 13 different voice characteristics independently associated with coronary artery disease (CAD), meaning patients with these vocal features were more likely to have the condition than those without them (In total, a third were diagnosed with significant CAD). The starkest differences between CAD and non-CAD patients’ voices were seen when they dished about a crummy day.

“It’s not at the practical level yet,” study author Dr. Amir Lerman told Vocativ. “But it has the potential to develop into a practical venue where you could use these characteristics to screen patients who could have significant blockages.”

Piqued by earlier research, Lerman’s team collaborated with Beyond Verbal, an Israel-based voice analytics company, for the project. Launched in 2012, the company currently has two consumer apps, Moodie and Empath, that it markets as real-life voice mood rings. Its one doctor-centric app, Beyond Clinic, is meant to collect voice recordings for the sort of research Lerman’s team is working on. And in 2014, the company debuted its Beyond Wellness API, which allows any developer to add their emotion trackers onto any app or wearable device.

Elsewhere, the race to create the vocal equivalent of Star Trek’s all-knowing tricorder has spanned the private and public sector. According to STAT, everyone from IBM to MIT is in the middle of developing vocal diagnostic tools aimed at detecting depression, Parkinson’s and, as with Lerman’s research, heart conditions.

Like the current study, the overall research into vocal diagnosing is encouraging but very much in its earliest stages. While the logic is sound — that chronic diseases can cause anatomic changes that subtly influence our voice — there’s still a lot of hurdles to climb before any technology could be of diagnostic use.

For instance, Lerman explains, we have to be sure the vocal signature of a disease can be broadly seen across different regional dialects and languages. And as his own findings suggest, whether there are certain emotional or physical states when these signs are clearest. And although we don’t necessarily need to understand how a disease changes our voice in order to detect alterations, it’d be nice. Lerman suspects that cardiovascular disease can cause tweaks in how our sympathetic nervous system operates (the broad network of nerves that helps govern our unconscious bodily functions, particularly those triggered by stress) that then tweak speech patterns, but that’s only an educated guess at this point.

Still, should more research, preferably conducted across different sites and with larger groups, pan out, the promise of a vocal stethoscope could certainly be impressive. For one, Lerman speculates, it could add a whole new meaning to the term “telemedicine,” allowing doctors to use a simple noninvasive phone call instead of a time- and resource-consuming physical to figure out whether someone needs preventative medical care.