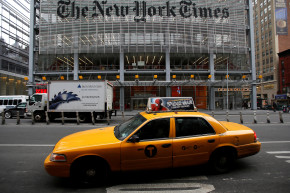 Since the election, Donald Trump has double down on claims the Times is losing subscribers over its coverage of him

Looks like President-Elect Donald Trump is decidedly wrong about the “failing” New York Times. Contrary to Trump’s claims that the paper is losing subscribers over its coverage of him, the paper announced Thursday that it recorded a net increase of 41,000 sign-ups in the seven-day period since Election Day.

“We’re delighted to see this unprecedented acceleration in the growth of subscriptions to The New York Times. We see this surge as further evidence of our ability to attract large numbers of new paying customers and build a subscription business of great scale,” said Mark Thompson, the president and CEO of The New York Times Company, in a statement. The 41,000 figure represents both print and digital subscribers. In addition, the Times said that as of November 15, it had added 100,000 new digital subscribers this quarter.

The company also said the site set new traffic records on November 8, 9, and 10, with readers spending five times longer (about 12.8 million hours) with Times’ content. “Our newsroom did exceptional work throughout the campaign and they have continued to provide our readers with penetrating and comprehensive coverage of the incoming administration,” Thompson added.

Trump, however, has of late been on a mini-tirade against the paper over what he views as unfair and unfavorable coverage of his campaign, claiming the Times is losing subscribers due to their “highly inaccurate coverage of the ‘Trump phenomena.'”

Wow, the @nytimes is losing thousands of subscribers because of their very poor and highly inaccurate coverage of the "Trump phenomena"

On Wednesday, Trump continued bashing the newspaper, this time over a story about his meeting with Japanese Prime Minister Shinzo Abe in which nuclear proliferation was mentioned, and its coverage of his not-so-smooth transition.

The @nytimes states today that DJT believes "more countries should acquire nuclear weapons." How dishonest are they. I never said this!

The failing @nytimes story is so totally wrong on transition. It is going so smoothly. Also, I have spoken to many foreign leaders.

But while the Times might be in a better position than Trump alleges, it hasn’t all been roses for the paper this year. Earlier this month, the company reported a serious decline in print advertising revenue for the third quarter. However, it also recorded an increase in digital ad revenue for the quarter. “This is an anxious and challenging time for the newspaper industry,” reporter Sydney Ember wrote while reporting on the paper’s third quarter results. “Print advertising revenue, which once sustained newspaper companies, has been falling for years. But the pace of the decline has accelerated, and digital advertising and other forms of revenue have not yet bridged the gap.”