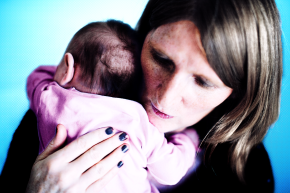 Why Do Women Who Have Children Later Also Live Longer?
By Alasdair Wilkins

Why Do Women Who Have Children Later Also Live Longer?

Let's consider the public health equivalent of a Rorschach test

Anyone who knows about public health research knows that it’s much easier to report on the “what” than to understand the “why.” A new study on an apparent link between delaying childbirth and living longer is a compelling example of why we struggle to place these kinds of studies in context. Let’s take a look at this public health equivalent of a Rorschach test.

The researchers, who looked at survey data of more than 20,000 post-menopausal women who took part in the long-term Women’s Health Initiative study in the 1990s, found women who put off having their first child have better odds of living past 90-years-old. Overall, 54 percent of the women had lived past 90, but those who were older when they had children and who had two to four kids tended to live the longest, they found. The link between longevity and childbirth was strongest when considering the age women had their first children, not their last children, and specifically for white women who were pregnant two to four times. They also found other correlations, but not all were statistically significant. But what to do with this information?

After all, it’s not as though the specific act of having one’s first child later in life somehow causes women to live longer, so there has to be some underlying factor that makes both more likely. Is it that women who are able to have children later also tend to be healthier on average than their peers? Is it all down to differences in socioeconomic status between older and younger mothers? Is it all somehow just a random statistical fluctuation?

In any event, the researchers say this result is a definitely not a reason to wait longer to have children. “The risk of obstetric complications, including gestational diabetes and hypertension, is higher at older maternal ages, and the risk of maternal mortality increases with age across all races and ethnicities,” they note in the study, which was published in the American Journal of Public Health.

But then, those very real health risks for older first-time mothers – and, by extension, those mothers’ success in overcoming them – might point to why they end up living longer, on average.

“It is possible that surviving a pregnancy at an older age may be an indicator of good overall health and thus higher likelihood of longevity,” the researchers write. “However, delivering her first child at a later age does not imply that a woman will achieve longevity.”

This may also explain why being pregnant multiple times is linked with greater longevity than being pregnant once or never. This is speaking very broadly, but the researchers suggest women who are able to become pregnant multiple times might well be healthier on average than women who never become pregnant or only do so once. Obviously, that doesn’t account for those who could have children but choose not to, but the overall connection could still work when looking a society-wide level. On the other hand, this greater longevity disappears when women are pregnant five or more times. That potentially reflects lifestyle factors, such as the obesity associated with having large families or weight gain associated with many pregnancies. For black women, the longevity effect falls off at four pregnancies.

Wealth and education are also both huge factors that could explain the broad connection between longevity and childbirth activity. Women who wait to have children may have more money and more education, both of which are also linked with living longer. The researchers note their findings are independent of those factors. However, they concede there were socioeconomic factors that they weren’t able to account for and that may well influence when women have children.

And finally, there’s one last explanation the researchers considered, which is another hidden variable in all this: Women who have children later also tend to go through menopause later – and that too is linked with greater overall health, for a variety of reasons. However, the researchers say their findings were independent of menopause age, so we can’t necessarily assume a connection there.

In the end, in all likelihood, it’s a combination of some or all of the above factors that explains this link, but we can’t say that for sure without more research.

So, what does all this mean? As with a lot of science, this is as much about what we don’t know as it is about what we do. That women who have children later tend to live longer might not seem especially surprising, but the researchers note theirs is the first large-scale study to actually look at this question. Studies like this matter because they actually verify things that seem obvious enough but we can’t just assume are true, and that sets the stage for future studies that can dig out the underlying causes. Until we learn more, the mistake would be to assume there must an immediately obvious explanation – or to think the absence of such an explanation makes research like this pointless. For now, the lack of explanation means this study must remain a Rorschach test, appearing to say lots of different things to different people but not actually saying anything at all. Not yet, anyway.