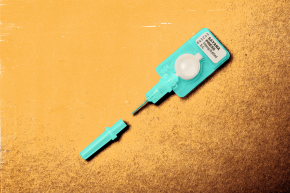 The Future Of Birth Control May Be Self-Injectable

Almost 225 million women worldwide looking to keep from becoming pregnant do not have access to a feasible birth control method, a problem especially prevalent in low- and middle-income regions of the world. Now researchers think that a new birth control drug that women can inject on their own might help.

A new study found that a self-injectable contraceptive method, manufactured by Pfizer and packaged in an injection device developed by the health nonprofit PATH, shows great promise in Uganda, where women give birth to two more children than they’d want on average, according to Guttmacher Institute. Data from 2011 shows that over four in 10 births within the sub-Saharan country are unplanned.

After nearly 400 women were trained to self-administer the drug, called Sayana Press, through single-use syringes, 88 percent were deemed competent in the practice three months later. Almost ever woman who partook in the study wanted to continue using it.

While the idea of self-injecting might seem foreign to Americans, it may be less of a leap in Uganda, where injectable birth control is the most common method used in today, according to a U.N. study. There, more than half of the female population using any method of birth control uses an injectable form, like Depo-Provera. Sayana Press can be injected just under the skin with relative ease, unlike Depo-Provera which must be injected into the muscle by another person.

“This pioneering research is important not only for the women of Uganda, but for all women,” Anthony K. Mbonye, a Uganda health official and co-investigator of the study, said in a press release. “The evidence that women can self-inject safely and successfully can help inform family planning program decision-making in countries around the world.”

In addition to being relatively easy to self-administer, the drug is reportedly low-cost and delivered directly to the women by volunteers. This approach can help women control their own reproductive schedules, which is usually a challenge given the difficulty of accessing clinics that provide family planning and abortion services (not to mention that the clinics are often unsafe) and cultural stigma surrounding contraceptive use.

In Uganda, as in many countries, the ability to discretely use birth control empowers women. One nurse tasked with teaching women how to inject the drug recently told Refinery 29 that many husbands believe family planning usage makes women barren.

Sayana Press is already available in some parts of Africa, first coming to Brukina Faso back in 2014 (though it wasn’t self-injectable at the time). Since then, nearly 500,000 doses of the drug have been administered in Burkina Faso, Niger, Senegal, and Uganda. Now its backers are seeking regulatory approvals in several countries so that women can administer it themselves.