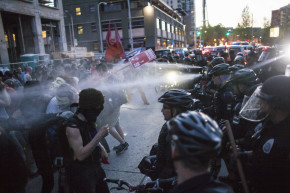 A collection of radical activists and anarchists pledge to put Washington D.C. in "total paralysis" when "The Donald" gets sworn in as president

When Donald Trump is sworn in as president on January 20, there will protesters with signs and people marching in opposition to the newly elected president. But others are planning “direct action” activism that will leave Washington D.C. in “total paralysis,” according to an organizer of activists and anarchists who plan to create chaos across the capitol city in an attempt to disrupt the inauguration and mobilize people in the growing movement against Trump.

Since Trump’s election, a movement called DisruptJ20 has taken off online among activist groups, anarchists, and the anti-facist movement. The goal is to organize the groups and ideologies under a shared goal: disrupting Washington D.C. on inauguration day in protest of Trump’s presidency in any way they can.

“We’re not just organizing some boring-ass march,” one of the organizers, Legba Carrefour, told Vocativ. “We want direct action.”

The goal, he said, is to simply create a disruption and “build on an evolving movement.”

Steal this: Open Call for mobilization against the inauguration of Donald #Trump on January 20, 2017 #DisruptJ20 pic.twitter.com/jBY0AnjUlA

Carrefour, who has been involved in “radical activism” for about 20 years, said he expects the activists to do things similar to what activists in the Black Lives Matter movement have done like block highways around the city, as well as other “direct action” that may or may not involve violence or destruction. To properly define “direct action” he pointed Vocativ to a Wikipedia page, which describes it as “when a group takes an action which is intended to reveal an existing problem, highlight an alternative, or demonstrate a possible solution to a social issue. This can include nonviolent and less often violent activities which target persons, groups, or property deemed offensive to the direct action participants.”

On social media, under the hashtag #DisruptJ20, some activists are openly calling for violence—”non-peaceful Trump transition” is a familiar refrain. Carrefour wouldn’t say whether he condones or encourages demonstrators to use violence. “We’re just providing an infrastructure. I can’t comment on what anyone else is doing,” he said.

#DisruptJ20 isn't just about Trump. It's a rejection of capitalism, white supremacy, patriarchy, & lgbtq hate. It's about the whole system.

The infrastructure, he said, is things like housing for out-of-town activists and a forum for different groups to organize, as well as basic things like water and “a convergence space for people to meet up.”

The city and federal law enforcement officials are already preparing for what will likely be a chaotic day in D.C.—they’re expecting up to 30,000 protestors and will “plan accordingly,” according to local media outlets.

Sixteen different activist groups already have signed on under the DisruptJ20 umbrella, some of which have used violence and destruction of property in the past during other movements like Occupy Wall Street, or at Ku Klux Klan rallies. But nothing, said Carrefour, has sparked more outrage than the election of Donald Trump.

“In my 20 years of doing radical activism I’ve never seen an uprise, or a social unrest like I have with this,” he said. “And for good reason.”