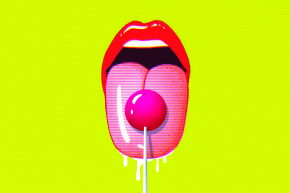 Virtual Blow Jobs Are Now A Thing
By Tracy Clark-Flory

Despite many years of hype, teledildonics have largely existed in the realm of disappointment and “one day this might be a thing” hypotheticals. But camming company CamSoda is investing in trying to actually make them a thing this time around with Blowcast, its new online marketplace for virtual blow jobs.

The blow job library currently consists of 16 different women, each with three different signature offerings available for $1 each. The virtual blowies come with evocative names like “All In,” “Firm & Fair,” “Earthquake,” “Nooner,” and “Bring’en thunder,” and range from five to 31 minutes. Users can rank the blow jobs with a “thumbs up” and “thumbs down,” and cautiously spend their dollars based on other users’ reviews.

Is this the exciting teledildonic future we have been promised for so long? Probably not — the creators acknowledge that these virtual blow jobs will not be confused for the real thing. If anything, this seems an indication of the hope that there is a real market for this right now, especially with the rise of virtual reality.

There are also other kinks, so to speak, to be worked out. As Motherboard points out, teledildonics have been proven to be vulnerable to hacking. CamSoda’s response to this concern isn’t particularly soothing, either. President Daron Lundeen told Motherboard that the company is trusting Kiiroo to secure its own network and added that “you can’t not offer a new technology to people because you’re afraid there might be some hacker out there.”

It’s a reminder that it isn’t just women who are vulnerable to nonconsensual experiences when it comes to virtual sex — and it is yet more reason to start seriously thinking about the sexual ethics of VR sex.