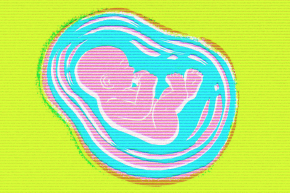 Expectant Parents Can Now Meet Their Fetus In Virtual Reality

Your unborn child, now in 3D

Those grainy sonogram images of unborn babies may one day be a thing of the past. Brazilian researchers have created a technique that allows parents-to-be to meet their baby in virtual reality.

For now, VR renderings of a fetus are most useful for specialized medical cases. But the researchers are also testing it out in more everyday situations.

“Our main objective is medical purposes. But we have been trying this experience within normal pregnancy just to feel the parent’s behavior,” says Heron Werner, an OB/GYN in Rio de Janeiro, tells Vocativ via email. “It’s really a wonderful way to show them their baby.” (Though the renderings still look a little creepy, as hyper-realistic animation sometimes do.)

Here’s how it works. First, technicians take a scan of the fetus as usual with ultrasound. But if a second, higher-resolution scan is needed, they might turn to MRI for more detail, which uses powerful magnets and bursts of radio waves to distinguish different types of tissues within the body. (Though MRIs are generally safe for pregnant women and their fetus, the researchers took the precaution of avoiding the first trimester and use of a contrast agent.)

Once they have the scan, the researchers can use the data to make a 3D rendering of the fetus, which takes 22 seconds. Then that can then be converted to virtual reality.

The researchers have been testing their virtual reality renderings on Oculus Rift 2 headsets, which has been “wonderful”—not only is the VR image sharper and crisper than previous imaging techniques, it’s cheaper than commonly-used 3D renderings because it doesn’t have to be printed out, says Werner. Parents can see renderings of their baby anytime after the 12th week of pregnancy.

The method will be useful in cases where an initial ultrasound suggests an issue, such as a fetal tumor or twin-to-twin transfusion syndrome, in which the placenta shares blood and nutrients unevenly between identical twins. 3D renderings can help doctors confirm the issue and strategize on an intervention with unprecedented accuracy; Werner and his collaborators have been using 3D scans for this purpose since 2010. VR could be even more useful, Werner says, as a team of doctors can look at the rendering together and collaborate on a treatment.

The renderings are not yet perfect—sometimes they get thrown off when the fetus moves, for example. And Werner says he and his colleagues are working to speed up how long it takes to convert the scans to VR renderings. They plan to test the technique for non-medical purposes more extensively over the next year.

The researchers will present their work at the annual meeting of the Radiological Society of North America and plan to publish a more detailed study of their work in the near future.