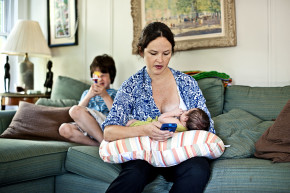 No matter how they feed their babies, women just can't win

Given the punishing popularity of “breast is best” rhetoric, it’s no surprise that mothers who feed their babies formula often feel guilty about it. But new research shows that even moms who do breastfeed feel bad.

Researchers from the University of Liverpool undertook two studies looking at women’s experiences with feeding their newborns. The studies, published in the Journal of Maternal and Child Nutrition, surveyed a total of more than 1,600 mothers with infants up to six-and-a-half-months of age. The participants were asked to answer a series of questions about their feeding method and how they felt about it.

Just as expected, many of the forumula-feeding moms felt bad about not breastfeeding: 67 percent felt guilty and 68 percent felt stigmatized. Most said they felt guilty because of a combination of internal and external pressure (mostly from other mothers and health care professionals). Not too surprisingly, those who had intended to exclusively breast-feed or who had initially tried exclusive breast-feeding but ended up formula-feeding all the time instead were at the highest risk for guilt.

Breast-feeding moms — including those who breast-fed exclusively and those who supplemented with formula — were much less likely to feel bad, but many still did: 15 percent felt guilty and 38 percent felt stigmatized. None too surprisingly, those who supplemented with formula were most likely to feel bad: 44 percent experienced guilt. The study notes the popularity of the “breast is best” mantra and says, “Feelings of guilt associated with formula supplementation could therefore arise from a sense of inadequacy or failing when compared with this socially constructed ideal mother.”

But even some of those doing exclusive breast-feeding reported guilt (roughly 8 percent). These moms largely said they felt guilty because of family members and other mothers. It’s not clear exactly why they felt this way, but the study suggest it might have to do with the fact that breast-feeding can be demanding and that “meeting maternal commitments with other children and managing domestic responsibilities in conjunction with social and public life could produce an array of incompatible expectations from breastfeeding mothers.”

In a press release, researcher Sophia Komninou explained, “Women who breastfeed feel stressed about neglecting the rest of the family and other obligations, whereas women who do not breastfeed feel a sense of guilt about feeding their child something sub-optimal,” she said. “They also feel shame about having to explain to others why they are not breastfeeding which leads to them feeling like they are failing to achieve the socially constructed status of the ‘good mother.'”