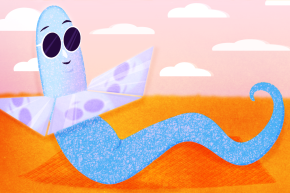 Tiny Worms Could Hold The Secret To A Better Sunscreen

The tiny worms known as nematodes don’t even have eyes, yet it turns out they carry a special protein that can absorb light 50 times more efficiently than the human eye. Hidden away in the nematode’s taste receptors is a previously unknown light-sensing protein that could someday be seriously useful for building a better sunscreen to protect humans from UV rays.

The human eye allows us to see because it can absorb light and convert it into chemical signals that the brain can interpret. In most animal species, the retina relies on a group of light-sensitive proteins, or photoreceptors, known as opsins to get the job done. Along with another kind of molecule known as cryptochromes, these had represented the only known photoreceptors in animals–until researchers at the University of Michigan reported their nematode discovery on Thursday.

“It’s very different from the known ones and not only in animal kingdom but in other organisms, including microbes and plants,” lead researcher Shawn Xu told Vocativ. “This guy is different.”

This new protein, known as LITE-1, stands apart because of its remarkable ability to absorb ultraviolet light at efficiency levels far beyond what the human and other animal eyes can do. That’s one reason it went unfound for as long as it did: It’s so efficient that nematodes don’t need to express the protein very often to get all the light absorption they need. As such, it took Xu and his colleagues years to track down the precise protein, even after they knew the eyeless nematodes must have a way to “see” (they respond to flashes of light.) That the protein was located, strangely, among the nematode’s taste receptors only made finding it trickier.

Xu said there’s much to be done before they can seriously start thinking about potential useful applications for LITE-1, but it could have potential as part of a better sunscreen. After all, sunscreen protects people from the harmful effects of ultraviolet radiation, which include sunburns, wrinkles and skin cancer.

Nematodes have just as much reason to fear ultraviolet light as humans do, which is precisely why LITE-1 is there to protect them. Conveniently, it absorbs both UV-A and UV-B light.

“Our hypothesis is nematodes use this photoreceptor to sense UV-light so they avoid it and don’t get killed by UV-light. This is a photophobic response, sort of a protective mechanism for these animals,” said Xu.

It’s possible this photoreceptor could eventually be used as an additive in sunscreen. This could offer protection against ultraviolet light that mimics actual biological function far more closely than current sunscreen, which relies on the ultraviolet-absorbing chemical zinc oxide. Xu, at least, said he would be happy to be rid of zinc oxide, which can leave an oily or chemical film on the skin.

A new sunscreen is likely a ways off, but there are other possible applications that could come sooner. Xu said this photoreceptor could be used in research to make other cells light-sensitive, making it possible for scientists to control how cells function just by shining ultraviolet light on them. In the meantime, now that the researchers have found LITE-1, they have plenty of work ahead of them understanding how it works to absorb light and how it fits into the nematode’s overall biology. Even a tiny worm can hold the most surprising secrets.