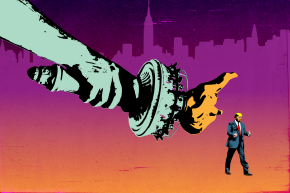 The president-elect wants to immediately deport 3 million immigrants from the U.S. He'll have to defeat America's largest cities first

Just a week after winning the election, Donald Trump has already started wavering on a number of major campaign promises. He’s suggested parts of the Affordable Care Act can stick around, said his infamous border wall might actually be a fence, and seems well on his way to stacking his administration with the “Washington insiders” he railed against. But he’s reiterated one particularly contentious claim — that he’ll form a “deportation force” to remove millions of undocumented people from the U.S.. Which leaves the question: can he actually do it?

A band of major American cities are emerging as a bulwark against Trump’s unwavering immigration proposal, one that could deliver a blow to the promise that fueled the president-elect’s run for the White House.

Trump said this week that his administration will move swiftly to banish as many as three million immigrants with criminal records from America’s borders. Independent experts believe that figure is wildly inflated (the Migration Policy institute, a non-partisan think tank, puts the number at around 800,000). But, in either case, that number will likely fall out of the Republican’s reach without the aid of so-called sanctuary cities, which have said they’ll refuse to work with federal immigration officials.

More Meet The Obama Voters Who Came Out For Trump

Officials in New York, Los Angeles, and 10 other cities with lenient policies on illegal immigration have already pledged to fight Trump on the issue since he won the presidency. And those dozen cities alone comprise nearly 20 percent of all undocumented immigrants in the U.S., a Vocativ analysis found. Hundreds of other cities and counties around the country, meanwhile, have laws that limit their involvement with federal immigration officials in some capacity.

Trump has vowed to end sanctuary cities, setting the stage for what could be a punishing political and legal battle. But he may be in store for a reality check instead.

“Mr. Trump’s plan will be undermined without the cooperation of these jurisdictions,” Muzaffar Chishti, director the Migration Policy Institute’s office at the New York University School of Law, told Vocativ.

This conflict reflects an inconvenient truth about federal immigration enforcement: it’s relied heavily on the aid of state and local law enforcement officials over the last two decades. And as deportations soared to record highs under the Obama administration, to more than 2.4 million during his first six years in office, many cities and counties began to rescind their assistance, citing the social and fiscal tolls it had taken on their communities — an example of how the refusal of cities to cooperate with the feds can complicate immigration enforcement, even under a liberal-leaning administration.

While there’s no technical definition, sanctuary cities generally refer to jurisdictions that do not cooperate with U.S. Immigration and Customs Enforcement. Some cities do so by prohibiting police from asking about a person’s immigration status. Others refuse to detain undocumented immigrants for minor offenses.

An analysis by the Migration Policy Institute last year found that at least 5.9 million undocumented immigrants — roughly 53 percent of the 11 million believed to be in the U.S. — lived in one of 360 jurisdictions that have passed laws to formally limit their cooperation with the ICE. Millions of them reside in cities that have publicly renewed their commitments to shielding immigrants since Trump’s election.

“We are not going to sacrifice a half-million people who live amongst us,” New York City Mayor Bill de Blasio told reporters last week. “We will do everything we know how to do to resist that.”

During the the presidential campaign Trump vowed to go after sanctuary cities, claiming that those who “refuse to cooperate with federal authorities will not receive taxpayer dollars.” The president-elect did not specify what money he would pull from these cities, though the Los Angeles Times reported that Trump advisors were looking to withhold federal law enforcement funds and equipment for state and local police. Attempts to strip federal funding from sanctuary cities by Republican lawmakers, who control both chambers of Congress, have repeatedly failed.

On Wednesday, Chicago Mayor Rahm Emmanuel, who formerly served as President Obama’s chief of staff in the White House, said he doubts Trump’s team will try to follow through on the funding threat. “I don’t believe they’ll do it, because that would mean every major city in the United States would be targeted, and that’s not what an administration will do,” he said.

More No, Voting Rights Restrictions Did Not Cost Clinton The Election

“We suspect he’s gearing up to implement a very harsh and radical deportation regime and he’s going to deploy it under the pretext [undocumented people] are criminals, when they are not,” Frank Sharry, head of America’s Voice, an immigration advocacy group, said.

Others are equally concerned. “Trump has said that he’s going to institute a deportation force,” Rachel Reyes, the communications director for the non-partisan Center for Migration Studies, told Vocativ. “Nobody knows what that means except that it would create a police state.”

Despite the proposed crackdowns, mayors of sanctuary cities like Minneapolis’s Betsy Hodges are remaining defiant. “I repeat: I will continue to stand by and fight for immigrants in Minneapolis regardless of President-elect Trump’s threats,” she said. “Minneapolis is being built and strengthened by people from all over the world and I am grateful for their commitment to our city.”