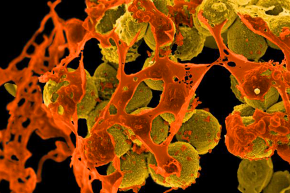 Livestock Superbugs May Be Making People Sick
By Ed Cara

A study shows how antibiotic-resistant germs are endangering farm workers

Though the nation’s white hospital rooms, damp gyms, and crowded prisons are acknowledged to be the major sources of antibiotic-resistant bacteria, its nearly billion acres of farmland are strongly suspected as a culprit as well. But proving that the antibiotics many farmers pump into their livestock are creating so-called superbugs and making people sick has been a challenge. Now, a small study of North Carolina hog workers offers some evidence that antibiotic-resistant germs are indeed spreading from farms and harming people.

Scientists and community activists have been working together in the state, where many of the nation’s pigs are farmed, to track the spread of superbugs associated with livestock. Their latest effort, reported in a study published Wednesday in the journal PLOS ONE, involved recruiting 103 hog workers and their immediate families. After the volunteers collected samples of their own nose gunk, the researchers screened them for strains of antibiotic-resistant Staphylococcus aureus. They also asked the subjects whether they had any skin and soft-tissue infections within the past three months.

Their results are concerning. Although only about 20 percent of workers carried any resistant strains linked to livestock in their noses, these were the workers who were much more likely to report infections. In particular, carriers of S. aureus strains resistant to three or more classes of antibiotics were almost nine times more likely to have a recent infection than non-carriers. Overall, 6 of the 45 workers carrying S. aureus had the telltale signs of infection, which include skin boils, pus-filled wounds, and itchy welts that look like a spider bite. All but one of the infected workers carried a strain with antibiotic-resistance.

Generally, resistant germ strains found outside the hospital and in communities are considered a growing and potentially significant public health threat. Many scientific and public health organizations, including the Food and Drug Administration and the Centers for Disease Control, have called for the reduction or outright banning of antimicrobials in the agricultural process.

But scientists simply don’t know exactly how much danger the superbug strains connected with livestock pose, senior study author Christopher Heaney, an epidemiologist at John Hopkins University in Maryland, told Vocativ–and the farming industry has used that uncertainty to delay action. Industry advocates and even researchers affiliated with the industry have insisted that any resistant strains found on the farm are likely harmless to exposed workers.

Heaney cautioned that his team’s findings aren’t a smoking gun. Only one of the six subjects with an infection (a swollen skin bump) was officially diagnosed by a doctor. And while they were asked about their infections without knowing their S. aureus status, meaning they weren’t subtly influenced, there’s no direct proof that the bacteria in their noses caused them. Harder still, Heaney explained, is showing these bugs were directly transmitted from animals to people.

Heaney, who collaborated with researchers from the University of North Carolina as well as members of the Rural Empowerment Association for Community Help (REACH) for this and similar projects, has had a difficult time gaining access to farms and manufacturing plants. Instead, his team has relied on reaching out to the low-income and often undocumented immigrant populations that make up the state’s agricultural workforce. The volunteers, all Hispanic or black but two, were recruited at an enrollment session held at a REACH office or even their local church.

While superbugs are a grave enough danger to everyone, with the CDC estimating that 2 million are infected with antibiotic-resistant bacteria and another 23,000 die from them annually, livestock workers and their families could be in a more precarious situation. More than half of the workers studied had no health insurance, and a third relied on emergency departments or urgent care centers for their medical needs. And the constant cuts and abrasions they collect during a hard day’s shift only raises their risk of incidental infection.

One encouraging finding, the authors wrote in the study, was that wearing a face mask was associated with a lower risk of infection.

Because of the lack of regular medical contact and distrust of authorities, Heaney said, it’s hard to tell whether emerging livestock-associated strains are spreading unseen throughout communities of these workers, and from there, to the rest of the world. Although only one parent-child pair in the study appeared to have the same strain, suggesting person-to-person transmission, research has shown that livestock-associated strains can be found in communities entirely removed from the farm, though they do seem to be less contagious than S. aureus typically found in humans.

In terms of addressing the “complete knowledge gap” of whether these strains can cause disease, Heaney believes his team’s work is an important first step, even as he notes that larger, longer-run studies will have to confirm their findings.

“It suggests there’s a reason to look further,” he said, “and to question any blind acceptance of the notion that livestock-associated strains are benign.”

Of course, that blind acceptance largely, if only, seems to be coming from the industry representatives eager to pretend their actions aren’t slowly but surely aiding our long-standing microbial enemy.