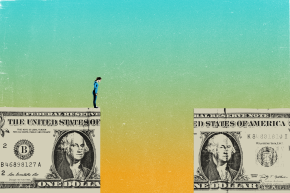 These Tech Roles Have The Most Egregious Gender Pay Gap

No wonder women don't want to be programmers

Despite the fact that a few major Silicon Valley companies, like Microsoft and Facebook, claim they pay men and women about equally, the tech industry as a whole still has a major gender pay gap problem, new data from Glassdoor shows.

Among the 16 most common tech roles for which the employer rating site has this kind of data, 12 had gender pay gaps above the national average of 5.4 percent. (And before any mansplainers chime in with the “well, actually” critique that pay gap statistics don’t account for specific differences in job roles and other demographic factors, it’s crucial to note that Glassdoor attempted to control for age, education, location, and experience.)

The occupations with the highest adjusted pay gap percentages were computer programmer and game artist. In these roles, women of statistically comparable education, experience, and location of employment made $0.72 and $0.85 for every dollar that men made filling these roles.

While it’s widely believed that the first-ever computer programmer was a woman, today, women are not only paid less, but there are far fewer in the field. Worse, their numbers are going in the wrong direction: Findings from Girls Who Code and market research firm Accenture released last month show that the female computing workforce is expected to shrink from 24 percent to 22 percent in the next 10 years.

“Despite unprecedented attention and momentum behind the push for universal computer science education, the gender gap in computing is getting worse,” Reshma Saujani, founder and CEO of Girls Who Code, said in a statement.

In the realm of game art, the apparent disparity in equal pay reflects a culture known for its well-documented history of being hostile to women — need we even mention GamerGate? Gaming blog Gamasutra has also documented a history of sexism within the gaming industry itself. Among a sample of 48 women working in the industry, almost 40 percent suspected pay discrepancies attributed to their gender.

While it’s true that the global gender pay gap still exists in every industry — including those dominated by women — it’s especially prevalent in STEM fields, where sexism and a discriminatory culture is known to exist in many forms. As harebrained solutions to the issue like “use your initial rather than your first name” (a real suggestion one male venture capitalist made this past fall) are finally being recognized for what they are, one can only hope that increased attention and transparency surrounding these issues will lead to progress.