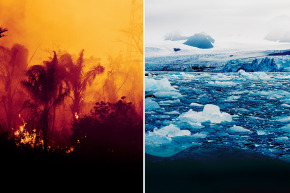 Deforestation Is Going To Cause More Climate Chaos Than We Imagined

Forget the old question of “if a tree falls in the woods and nobody is around, does it make a sound?” If a forest dies, the other side of the world can feel it. That’s the finding of a new study examining how local deforestation can reshape global climate like a woodland version of El Niño.

The last few decades of El Niño events have made people at least vaguely familiar with the idea that changes in ocean currents can alter distant atmospheric and climate patterns. A shift in the Pacific’s tropical waters can, say, make it suddenly rain less in Seattle and more in Los Angeles. Similarly, researchers at the University of Washington have now used climate models to explore whether extreme deforestation can have the same kinds of ricocheting, interconnected effects on distant ecosystems.

“If a forest dies, it doesn’t just matter for its neighbors, it matters for distant plants that are living really far away,” co-author and climate researcher Abigail Swann told Vocativ. “The climate system can communicate what happened in one place, and that might be good or bad for forests somewhere else, but it’s not limited to just the local areas.”

The loss of forests can actually make nearby areas cooler, at least temporarily, because deforested regions reflect more sunlight than wooded areas. On a big enough scale, the deaths of forests can change how much sunlight is absorbed in entire hemispheres, which would then alter precipitation paths and other atmospheric activity. Different areas will benefit or suffer from those disturbances, and the effect on those forests can drive still further changes. It’s an intricate, crisscrossing mess, and this climate model suggests that, even if the effects aren’t big enough to be observed yet, they likely will be as climate change worsens and the effects on local ecosystems become more extreme.

“Look at how forest mortality has been increasing over the past decade and it’s predicted to increase going into the future. You might expect to see some really large changes to the land surface that are driven by climate change in some part, and also by things like human deforestation,” said Swann.

The researchers’ climate models give some sense of how big the impacts could be. For instance, the continued loss of the Amazon rainforest would ultimately make Siberia colder, but plants and trees in the southeastern United States would likely benefit. The Amazon’s neighboring forests in South America would also do well, as the loss of the Amazon could increase rainfall during the summer months. Those precise effects might not end up happening in reality, but they point to how disruptive the loss of forests could be on a global scale. In any case, it will take time to tease out exactly how the world’s forests connect with climate.

“It’s a global system,” said Swann. “We expect the atmosphere has preferred ways in which it responds to being poked. We don’t suspect that this is random, but it can be connected to just about anywhere.”

As for how this affects humanity’s approach to climate change more generally, Swann said this adds another complicating factor when considering how best to preserve a warming planet. The research is another reminder of just how interconnected the world’s climate system is, when even a seemingly local change can have potentially global consequences.