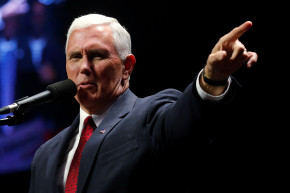 Mike Pence is having a pretty rough week. A software developer and marathon runner shares the name, but not the politics, of the vice president-elect — and because he is the owner of the Twitter handle @MikePence, this Pence has found himself the target of some confused, internet users.

Trump supporters, do you and me the favor of unfollowing me. Enjoy your fascist paradise. https://t.co/QZRCsMaUur

After posting a meme from the movie “Office Space,” showing the character Michael Bolton complaining about the famous singer who shares his name, Pence’s struggle went viral. Vocativ found nearly eleven thousand tweets tagging Pence since November 15, the day he posted the meme, many of them offering their condolences for the difficult position he finds himself in.

Some of Pence’s well-wishers included other regular people who share famous names, such as Ben Carson, Chris Brown, and yes, Michael Bolton.

The engineer, who’s had his account since 2007, has been noting that he’s not that Mike Pence since the Indiana governor was named Trump’s running mate, but he’s found himself an object of renewed focus over the last week. In his Twitter, bio, he writes. “Not a Christo-fascist politician.” To clear up any further confusion, he’s also been tweeting about it.