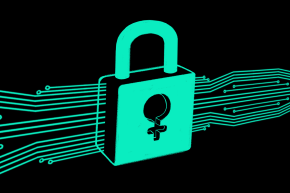 Cyber-Feminism: Women Take Up Encryption In A Post Trump World
By Tracy Clark-Flory

Cyber-Feminism: Women Take Up Encryption In A Post Trump World

Women, and feminists in particular, are responding to Trump's election by seeking digital privacy

Early last year, activist Noah Kelley published “A DIY Guide to Feminist Cybersecurity.” It’s a primer on things most people in this day and age could stand to learn about — encryption, anonymous browsing, and VPNs — but it focused specifically on how feminists can make it “much more difficult for trolls, trackers, and hackers to compromise [their] digital spaces.” The guide got a decent amount of attention when it first launched, but that soon died down. In the days since Trump was elected, though, it’s had a boom in traffic. “I’ve seen my work go viral since the election,” he said.

Kelley isn’t the only one who’s noticed feminists and women gaining interest in these subjects. Following Trump’s win, some feminist activists have seen a sudden boom in conversations about security and safety in the digital world. On Tuesday, the blog Feministing posted a guide to cybersecurity, noting that “surveillance is a feminist issue.” Indeed, the site has covered several privacy stories in the past, including one on surveillance technology being used to target women seeking abortions, but this is the first time it’s put out a how-to guide on digital security.

Of course, a lot of people, not just feminists, are suddenly concerned about digital security. Downloads of Signal, an encrypted chat app, have skyrocketed since November 8. And all-purpose guides on cyber security in the Trump era have shown up everywhere from Slate to The Intercept to The Guardian.

But Kelley, founder of HACK*BLOSSOM, an activist organization that he describes as “fighting for the safety and autonomy of marginalized people in digital spaces,” says there’s particular interest from feminists right now. “There’s a white supremacist sexual predator who will have access to the most powerful surveillance mechanisms in human history, while pledging to curtail the rights of women, Hispanics, and Muslims,” he said. “Feminists are understandably interested in protecting themselves digitally.”

Anita Sarkeesian, a feminist cultural commentator and founder of Feminist Frequency, says a guide to online security that she co-authored has seen traffic grow as much as 800 percent in the days since November 9 — from just a few dozen views the day before the election to nearly 400 on Monday. Granted, that’s not a huge amount of viewership, but she’s also observed growing conversations around digital security in feminist circles.

“Encryption has always been an important component of digital based activism and online safety, but that tends to be more specific in certain circles,” she said, pointing to her feminist colleagues who also run in hacking and web security communities. “But I think it is relatively new as many feminists and allies are thinking about more traditional forms of activism that they have never previously been a part of.”

Last week, journalist Arikia Millikan reached out to women-in-tech listservs with some basic pointers on things like encryption, warning that “now is a good time to get serious about online security.” The response was strong enough that she followed up on Sunday with what’s known as a cryptoparty, where just under a dozen people gathered to learn more about protecting their online privacy. They went over security best practices and swapped “keys” — a phrase that has nothing to do with swinging and everything to do with vouching for the authenticity of each others’ encrypted accounts. The gender ratio was evenly split, which is rare for these kinds of events, she said.

“A lot of smart, powerful women rallied around Hillary this past election and are devastated,” she said. “If they weren’t weary of the unconstitutional measures the U.S. government has taken to spy on citizens before, they sure are now that Trump will inherit those programs. They aren’t going to give away their personal data to a government they no longer trust, and they are taking steps to protect themselves.”

Feminists have particularly sought out encryption “because they don’t like the idea of a government run by a president who clearly does not respect women having access to their private conversations,” she said. “If you were playing basketball, would you want the coach of your opposing team having access to your playbook? No, because then you could never win.”

A woman who attended Millikan’s event, and who asked to remain anonymous, said that everyone she’s told about the get-together has responded along the lines of, “wtf is a cryptoparty?” That, she said, “tells me a lot of people are in the dark about all this.”

Since the election, Kio Stark, a journalist with an interest in both technology and feminism, has also been reaching out with security pointers. “I am trying to spread the information as widely as I can among friends and colleagues, especially to people who may be getting involved in organizing, speaking out, and helping locally,” she said. That includes, but is not limited to feminists, she said.

“It’s not only that they should be aware of security as individuals. I’m especially keen to make sure people understand that it’s not just them, it’s their networks that can be put at risk,” Stark said. That’s both because non-secure online communication can put all of your email contacts at risk, and also because using encrypted technologies like Signal solely to communicate with other activists means you’re essentially drawing a map to other activists.

“[F]or women whose job or mission it is to report on, or comment on gender and politics issues and women’s rights, or anything now potentially considered ‘radical’ or ‘oppositional,’ obviously they can’t hide from their politics being known and don’t want to,” she said. “But they can protect others by being careful.”

Not everyone is observing sudden feminist attention to cyber security, though. Shauna Dillavou, co-founder of CommunityRED, an organization devoted to “security strategies for voiceless and vulnerable communities,” hasn’t seen any change. “For most feminists, nay, for most women, the act of engaging online is radical,” she said, adding that this was true long before this election. Typically, she says, women’s online risk assessment involves the threat of “the masses of trolls” showing up on their doorstep. “Having elected the biggest online troll this country has seen, this won’t fundamentally change,” she said.

Dillavou also notes that most cyber security guides focusing on things like encryption are written by men, for men. “For these privileged guys, the government is their only adversary,” she said.

Sarkeesian, who famously was the target of an online harassment campaign, also sees the current risk as bigger than just Trump and the surveillance machine soon to be at his fingertips. “Put quite simply, the events of the past few months and specifically the past few days have proven that far too many people in the US find sexism, racism, bigotry and egregious forms of hatred acceptable,” she said, pointing to a recent rise in hate crimes. She knows as well as anyone that online threats do not just come from government surveillance.

“As feminists, we need to protect ourselves and support each other,” she said. “This includes making sure that we maintain our digital safety, share ways to secure our online identities with one another, and continue to put pressure on mass media, law enforcement, and the social institutions that help perpetuate the tenets of intimidation and harassment.”