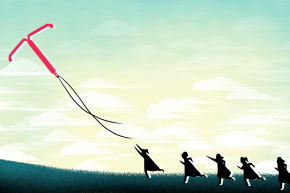 Women Really Are Rushing Out To Get IUDs
By Allee Manning

Women Really Are Rushing Out To Get IUDs

In the immediate aftermath of the election, articles and tweets urging women to go out and get IUDs infiltrated our feeds. President-elect Donald Trump has, after all, run on a platform of rolling back reproductive healthcare access. It turns out that many people took the message to heart, as new data shows that women are rushing out in droves to get their long-term reproductive birth control squared away.

Today I got an IUD and I feel great and empowered about exercising my right to take control of my reproductive health.

“These spikes illustrate just how important the Affordable Care Act’s birth control benefit has been for women to access the birth control method of their choice. Without coverage, out-of-pocket costs for IUDs can range from $500 to $1,000, which can be a major barrier for some women,” McDonald-Mosley said in a statement. “While we truly hope that birth control methods will remain available, accessible, and affordable to all women under the Trump administration, we understand people’s real concerns about losing access to birth control.”

Since IUDs are typically a hassle-free method of preventing pregnancy that last three to 12 years and require no maintenance post-insertion, they’re seen by many as the best contraceptive method — especially in this uncertain time. The device’s safety, effectiveness, and longevity is the reason that the American Academy of Pediatrics recommends it (along with other comparable methods, like the implant) above other contraceptive methods for the prevention of teen pregnancy.

“The IUD has a lot of advantages over other methods of contraception,” said Dr. Gillian Dean, associate professor of obstetrics, gynecology, and reproductive science at the Icahn School of Medicine at Mount Sinai told Vocativ. “You don’t have to go to the pharmacy to refill the prescription, you don’t need to go to the pharmacy to get an injection. Women really own their IUD once placed inside.”

Which means, essentially, that it’s pretty much the most Trump-proof form of birth control out there.

Birth control is currently classified as a method of preventative care and covered under the Affordable Care Act sans copayment or coinsurance, which Trump has already promised to gut. Though he hasn’t been clear on which pieces of the legislation he intends to take and which he intends to leave, it’s possible that affordable, accessible reproductive healthcare without co-pays or deductibles could end up getting cut. (After all, this has been one of the most controversial pieces of the legislation passed by President Obama, and the decision as to whether or not employers should be required to provide health insurance that covers birth control on the grounds of religious freedom played no small part in that.) This could mean out-of-pocket costs for many people looking to remain not-pregnant might skyrocket in the future.

Not to mention the fact that abortion accessibility could also be at risk, as Trump recently suggested that Roe v. Wade could be overturned during his presidency. He also once stated that women who have safe, legal abortions should have to endure “some form of punishment,” a position he quickly reversed.

So an IUD is a dependable option for an uncertain future. “One of the benefits that is very specific to this particular moment in time is that the IUD, once in your body, cannot be taken away from you,” Dean added.