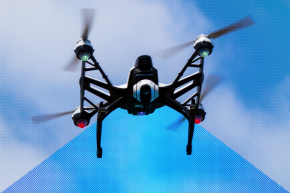 This Grocery Drives Itself To Your Door
By Ruby Nitzberg
Family

Hell hath no fury like a drone-owning husband scorned.

Our story comes to us from Reddit, where a poster claimed he used a drone to stalk his wife across town and film her hopping into the car of another man. He then rushed to share the footage — along with his humiliating heartbreak — with the rest of the world. (At least, according to a very viral, and very unverified, video.)

Dejected and angry, the unnamed man posted the alleged betrayal on YouTube Monday along with a narrated commentary punctuated by emotional outbursts. It went viral less than 24 hours later, racking up more than one million views and generating nearly 3,000 comments.

‘If you watch carefully, you’re going to be able to see 18 years go right down the fucking drain,” says the allegedly spurned man, whose face appears only briefly at the beginning of the two-and-a-half minute video.

According to the husband, who uses the YouTube handle YAOG, he had grown suspicious of his wife’s activity and had even tried stalking her on foot — only to find her going to work. Convinced she was canoodling with another man, he then decided to start following her around with a drone he owned.

In the video, the remote-controlled aircraft tracks the wife from what the man claims is their home to a nearby CVS, where a different man in an SUV is waiting for her.

Off camera, the sound of a fist pounding a table can be heard. Cue the eruption: “‘Eighteen fucking years gone! Eighteen years and you just threw it away like that,” the husband says. “We had a good marriage, I thought it was a pretty good marriage. Apparently not.”

Now, there’s a lot we don’t know here. The woman could very well be hoping into her brother’s car — or they could all be actors, setting this up for a shot of viral fame. (It’s happened before.) Vocativ was unable to verify the authenticity of the video and the man who made it didn’t return our requests for comments. But, while the story could be bogus, his tears seem pretty real.