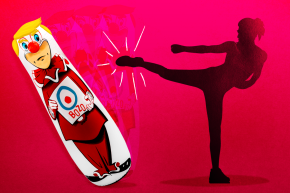 It’s been seven long days since Donald J. Trump was elected president of the United States, and if you’re among the Americans who believe that making a reality television star leader of the free world was not the human race’s best decision ever, you may have noticed negative changes in your behavior since last week — perhaps increased alcohol consumption, doomsday prepping, or a lack of interest in anything other than screaming “why” over and over again.

If this sounds like you, it might be time to close your laptop, and find a new way to channel your rage. It appears people all over the country have already had this idea as there’s been a huge surge in election-related appeals for companionship on Craigslist that cater to whatever stage of grief you’re in.

One listing posted by a man in New York City comes with a NSFW picture of his bottom and a simple message: “This is not a solution, but maybe a small, fun, cathartic escape. Take out your anger by putting me over your knee and giving me a hard spanking!” This sentiment is echoed in another New York listing that says “I voted for trump. If you are feeling angry about trump, and you feel like relieving some stress, use me as your personal kicking/punching bag. [sic]”

Another listing in New York offered the reverse scenario. With a picture of white bros celebrating at Trump’s victory party, the ad reads: “Did you vote for Trump? Feeling bad about it now? Come over, I’ll tie you up to my bed … until you’re begging for forgiveness.”

A very NSFW post from Los Angeles gives you the opportunity take out your frustrations on one of the white male voters who put Trump in office. The ad reads: “I have a tall white gay male friend that I publicly humiliate when he is nude. The whitey likes to have Superior Blacks [sic] humiliate him white nude. Help me put naked whitey in his place.”

Suffice to say, there are a lot of people who don’t know what to do with themselves in Trump’s America other than boink as an escape, and you can find them Craigslist.