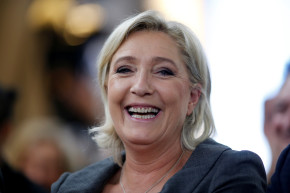 Marine Le Pen, leader of France’s conservative National Front party, hopes the same currents that carried Donald Trump to the White House will propel her to win her race for the presidency. On Tuesday she told CNN that Trump’s win shows “people are taking their future back.”

Both Trump’s surprise victory last week and the Brexit vote in June highlight a rise in anti-establishment nationalist movements — and a political climate where it seems like anything can happen. Le Pen hopes to capitalize on this unpredictability. “Donald Trump has made possible what was presented as completely impossible,” she said.

Le Pen, 48, has been leading the National Front since 2011. Her father, Jean-Marie Le Pen, led the party for nearly forty years prior, before he was expelled in 2015 for xenophobic and anti-Semitic statements. The National Front’s policies echo many of Donald Trump’s campaign planks: it’s deeply anti-immigration, opposed to the EU, against trade and espouses ‘law and order.’

Now, the longtime fringe candidate believes that she too might have a real chance at winning when the country votes for president next spring. She describes her opponents saying, “They say, ‘The policies that, you, Marine Le Pen have, have isolated you.’ I feel less isolated today because of the multi-polar world defended by Donald Trump but also by Theresa May and Vladimir Putin.”

Her top strategist, Florian Philippot, tweeted “Their world is collapsing. Ours is being built.”

Le Pen is not the only far-right political leader in Europe hoping that the victory of a xenophobic and anti-immigrant candidate in the US will help further their parties. Other nationalist groups and leaders in Europe are celebrating and congratulating Trump’s victory. Prime Minister of Hungary Viktor Orbán said in a Facebook post, “What great news. Democracy is still alive.”

Frauke Petry, a leader of Germany’s right-wing populist Alternative für Deutschland, was also encouraged. According to the Guardian, he said, the results “could herald a political sea-change in Europe too.” Heinz-Christian Strache, leader of the right-wing Freedom Party of Austria, commented on Facebook that Trump’s win illustrates, “Bit by bit, the political left and the out-of-touch and corrupt establishment is being punished by voters and driven from the seats of power. That’s a good thing because the law comes from the people.”